Faced with an energy crisis because of Russia’s war in Ukraine, western nations have been looking elsewhere to shore up their supply.

‘If your country is breaking a promise not to finance new fossil fuel development overseas, by investing in new gas infrastructure in Africa, then you are not a climate leader,’ Ugandan climate activist, Vanessa Nakate, told delegates at an event on clean energy transition hosted by Britain on the sidelines of the summit.

‘If your country’s planned expansion of its oil and gas development would by itself put the 1.5 degrees Celsius target out of reach, then you are not a climate leader. So, I ask each of the leaders here today. Will you be on the right side of history?’ she said.

Countries agreed in the 2015 Paris climate accord to limit global warming to 1.5 degrees Celsius by the end of the century if possible.

Nakate was one of many African climate activists taking aim at world leaders who continue to back new fossil fuel projects despite warnings from scientists.

‘The Russia-Ukraine crisis has caused increased demand for gas in Africa. There is a new project now, the Nigeria-Morocco Gas Pipeline Project, taking gas from Nigeria through Morocco to Europe. And we are saying we don't want that to happen,’ said Nigerian climate activist, Innocent Ighodalo Edemhanria.

Nakate warned that the annual meeting is being infiltrated by oil and gas representatives who are turning it into ‘a sales and marketing conference for more pollution and more destruction and more devastation’.

Environmental groups say they have counted more than 600 delegates with links to the fossil fuel industry at the conference.

‘Countries of the global north have been shopping for gas in Africa, using the energy crisis at the moment, the war in Ukraine and the energy poverty in Africa as a pretext to start doing gas production in Africa,’ said Ina Maria Shikongo, a Namibian climate activist.

‘What that means is obviously opening up new gas fields, oil fields, and also putting the entire carbon budget at risk.’

Scientists are warnings that new fossil fuel projects will push global temperatures to dangerous highs. And they say that with about 1.2 Celsius of warming already reached, the 1.5 degree target is already likely to be missed. 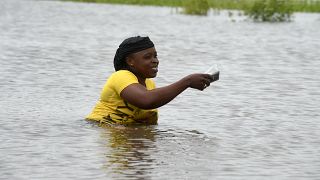