Speaking ahead of the 18th summit of the Organisation Internationale de la Francophonie (OIF), the organisation’s leader has denounced what she says is a decline in the use of the French language in international bodies.

OIF Secretary General, Louise Mushikiwabo, says that while the number of French speakers worldwide has increased by seven per cent since 2018, this is mainly due to a population increase in Africa.

La Francophonie, established in 1970, is an international organisation which regroups 88 states and member governments and observers on 5 continents that share French as a common language.

‘We are not language jihadists’

‘We are here to ensure that the French language is taught, spoken, and used. There are 32 African countries that are members of the organisation, and 19 from the European Union. But today, we live in a world where all our member states, apart from France, have other languages too. Many countries that were very focused on the French language today are open to English, Chinese, Turkish, and Arabic,’ says Mushikiwabo.

But in some African countries, France appears to be increasingly unpopular and analysts says there is much anger towards Paris from young French people.

At recent anti-French demonstrations in Burkina Faso, protestors called on France and its media to leave their country.

But Mushikiwabo believes this anger has nothing to do with the language itself.

‘The revolt that we see, especially among French-speaking youth in Africa, is for me more an affirmation of a much broader identity and a multiple identity. Today, it's a youth that doesn't want to belong to one big country, in this case the former colonial power. It is not at all a rejection of the French language,’ she says.

The 18th summit of Heads of State and Government members of La Francophonie gets underway on the Tunisian island of Djerba later this week.

Mushikiwabo is calling on them to redouble their efforts to ensure that the French language is ‘maintained in their international bodies’ and, in particular, in their school curricula. 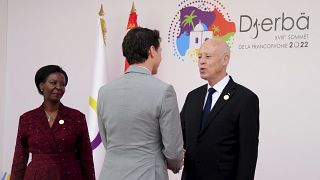