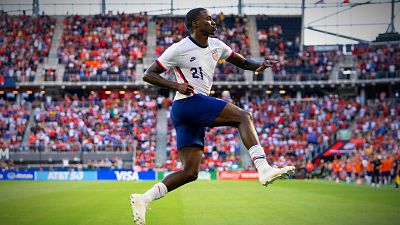 Timothy Weah, the son of Liberian President George Weah, is among the 26 players selected to represent the United States at the World Cup in Qatar.

Born in Brooklyn 22 years ago, the 22-year-old striker is fulfilling a dream that even his illustrious father, who won the Golden Ball in 1995, had not achieved. Tim Weah has worn the Stars and Stripes jersey 25 times since his debut in March 2018.

He has scored 3 goals, including one against Morocco (3-0) in a friendly last June.

He won't be the only Liberian-born player heading to Qatar as coach Gregg Berhalter has chosen to call up Haji Wright, the young striker from Antalyaspor in Turkey.

The U.S. will also rely on American-Ghanaian prodigy Yunus Musah.