Three people have been killed in scuffles over food aid at a displaced persons' camp in eastern Democratic Republic of Congo.

Many people in the Kanyarucyinya camp have fled fighting between the M23 militia and President Félix Tshisekedi has called for support from young people to resist the rebel forces.

"In response to the strong demand from the youth, I invite them to organise themselves into vigilance groups in order to support, accompany and sustain our armed forces, our defence forces," he said

M23 rebels have captured swathes of new territory in recent weeks and displaced tens of thousands of people and President Tshisekedi is blaming Rwanda.

"In reality, Rwanda has expansionist ambitions, with its main interest being the appropriation of our minerals," he said. "And to do this, it is actively destabilising eastern Congo to create a lawless zone in order to satisfy its criminal appetites."

The resurgence of the M23 has destabilised relations in central Africa and displaced an estimated 183,000 people in North Kivu since October 20.

The Kanyarucyinya camp houses around 17,500 people near the city of Goma.

Local officials on Thursday brought food to the camp but decided to distribute the aid the following morning.

The decision angered some of the displaced people, provoking scuffles in which three people were killed.

Some of the displaced were shot and others trampled. 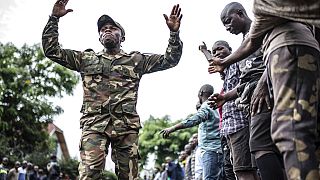