Kenya's athletics reputation took a blow after the suspension this year of an unusually large number of long distance runners for suspected doping.

A top Athletics Kenya official even warned that the nation was at risk of an international ban, with 25 athletes hit with sanctions and 19 active cases pending in 2022 alone despite renewed efforts to stamp out the scourge.

Top Kenyan sportsmen have spoken out against the use of performance-enhancing drugs, with marathon star Eliud Kipchoge calling it a national "embarrassment".

"Doping is a menace which kills the credibility of Kenyan athletes and the country. I encourage every Kenyan athlete to run clean and leave a legacy", he doubbled down.

Most of those suspended or banned for violating Athletics Integrity Unit (AIU) anti-doping rules this year are involved in road and marathon running, where the huge prize money up for grabs has helped fuel the corrupt practice.

Two popular drugs of choice are Norandrosterone and triamcinolone acetonide -- the latter is used for weight loss, muscle building and endurance and has long been part of doping in cycling.

The AIU said last month that 10 Kenyan athletes had tested positive in 2021-22 for triamcinolone acetonide, which was still allowed in some forms last year before being banned in January.

Anti-Doping Agency of Kenya (ADAK) head Sarah Shibutse attributed the surge in cases in part to the long Covid-enforced lull in competitions that left runners idle.

Shibutse noted that many Kenyan athletes come from poor backgrounds, and rely on their sport to earn livelihoods for themselves and their extended families.

And when races finally resumed after the lifting of pandemic restrictions, competition was stiff, Shibutse said in an interview with AFP.

"This gave quite a number of them the impetus that 'I would rather dope so that I can participate in these competitions and win, than just say that I have trained enough and my talent will get me there'."

She also blamed agents, coaches and managers for pushing the athletes too hard to succeed and make up for their own lost earnings.

But she said she saw a light at the end of the tunnel, with increased testing, intelligence gathering on athletes and awareness programmes.

"We want to treat doping with aggressive education the way we treated the anti-HIV campaign," she added. "We're going to the churches, talking to the politicians to enlighten Kenyans of the dangers of doping."

The problem is not new -- the athletics powerhouse has been in the top category of the World Anti-Doping Association's (WADA) compliance watch list since February 2016.

According to the AIU, a total of 138 Kenyan athletes across all sports had tested positive for prohibited substances between 2004 and August 2018.

Rita Jeptoo, a multiple Chicago and Boston marathon winner, and Jemima Sumgong, who won the Rio Olympic title in 2016, were among those banned for taking the blood boosting Erythropoietin (EPO).

And in 2019, Asbel Kiprop, the 2008 Olympic and three-time world 1500m champion, was given a four-year ban after testing positive for the drug.

"But there's an attempt to evade detection by using a substance that can be used therapeutically with the right medical excuse," he added.

"Fortunately with our intelligence, in assistance with our local partner in ADAK, we've managed to get on top of this quickly and discovered what was going on."

It has also organised educational workshops, targeting the under-20s in particular.

Kenya's new Sports Minister Ababu Namwamba has promised to move with haste and start cleaning up the mess.

But in an editorial last month headlined "Slay the doping dragon", Kenya's leading newspaper the Daily Nation lamented: "The spiraling cases appear to be a mockery of the efforts."

Korir said senior athletes had already gone through the awareness process. "But they're the ones being nabbed for using the banned substances and showing the juniors a bad example.

"It's undoubtedly sad to see that some of those being slapped with suspensions and bans have been common participants at many of these workshops and were aware of the repercussions."

Kenya has only one WADA-approved blood testing laboratory so it still sends urine tests to Qatar and South Africa for analysis.

The head of legal services at ADAK, Bildad Rogoncho, said the body was currently conducting 1,500 urine tests a year but could double that and add another accredited lab if given more money by the government.

Kipchoge, Kenya's world and Olympic marathon champion, voiced concern after three of his pacesetters in his record-breaking sub-two-hour marathon race in Vienna in 2019, including training partner Philemon Kacheran, were suspended.

The level of doping in Kenya was, he said, an "embarrassment" and "immoral".

"Doping is a menace which kills the credibility of Kenyan athletes and the country. I encourage every Kenyan athlete to run clean and leave a legacy." 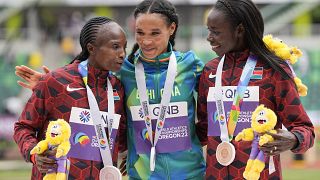 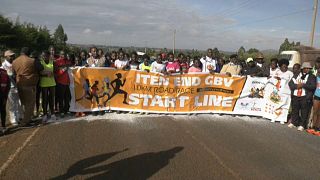