The former president of Niger, Mahamadou Issoufou has warned of dire consequences that befell the Sahel, a region plagued by acute insurgency.

Issoufou further said that the war in the Sahel has been neglected by the world and instead more attention given to Ukraine terming it a double standard.

"It shocks Africans to see billions of dollars raining down on Ukraine while eyes are diverted from the situation in the Sahel. When we set up - to illustrate what I just said - the G5 Sahel and its joint force; to make the G5 Sahel joint force operational, we needed 400 million dollars, but we never got it.

"The massive support that is given to Ukraine, one has the feeling of having double standards;" said Mahamadou Issoufou, the ex-president of Niger.

The former leader was speaking during the just concluded Dakar 8th edition of the Dakar International Forum.

The former leader further said he held the international community responsible for the situation in the Sahel following their military intervention in Libya.

The war's impact has been felt strongly in Africa, where food prices soared as imports notably of cereals and fertilizer were restricted.

France and the West in general are often the butts of accusations of neo-colonialism in Africa -- that they try to impose policies on local governments or promote their own economic interests.

In the Central African Republic and Mali, Russia has built up close ties that have translated into Russian military support and waning French clout.

Zacharopoulou assured the meeting that when Paris sends a military mission such as the Barkhane force to fight jihadist insurgencies in the Sahel it was not to "substitute" for local armies but to "support" them. 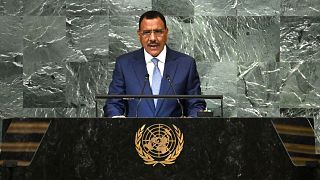