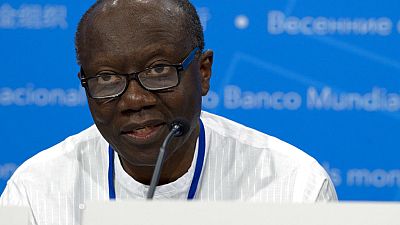 Ghana's ruling party lawmakers on Tuesday called for the sacking of the country's finance minister, adding pressure on the government to deal with record inflation.

President Nana Akufo-Addo has come under fire as Ghanaians face 37 percent inflation and the collapse of their currency - the cedi - in an economic hardship worsened by the Russian invasion of Ukraine.

Finance Minister Ken Ofori-Atta has just returned from Washington, where he was in talks with the International Monetary Fund (IMF) to secure a loan of $3 billion.

In addition to Mr. Ofori-Atta, a majority of parliamentarians from Mr. Akufo-Addo's New Patriotic Party (NPP) have called for the dismissal of another finance official.

The president must immediately fire the two officials "to restore hope to the financial sector and reverse the downward trend in the growth of our economy," the parliamentary group's spokesman, Andy Appiah-Kubi, told reporters.

"Until the aforementioned individuals resign or are removed from office, we in the parliamentary majority group will not participate in any government activity," Appiah-Kubi warned.

"If our request does not receive a positive response, we will not be present at the session on the budget, nor will we participate in the debate," he said.

The call was supported by 80 of the 137 legislators in the NPP parliamentary caucus.

In Ghana's parliament, the NPP and the National Democratic Congress (NDC) have the same number of seats. Lawmakers are scheduled to begin debating the 2023 budget in November.

On social media, the call by the majority caucus in parliament has been leading the trends with minority MPs also calling for the same motion.

The video below by local media TV3 shows minority MPs addressing the media.

President Nana Akufo-Addo has been criticized for his economic management of the country, including his decision to enter into discussions with the IMF, which he once promised would lead to an "aid-free Ghana.

This decision has raised fears that the government will impose austerity measures that will further burden the population, which is already facing soaring prices.

Last week, shopkeepers in the capital, Accra, shut down their stores to protest against the soaring cost of living.