It was dark. Everything was dark. And the water level rose, even higher. This time, Fortune Lawrence resigned herself to flee with her 8 children on a makeshift boat, far from her house ravaged by the floods.

It has been two weeks since the 50-year-old and her "pikin" ("children" in Nigerian pidgin) fled the deadliest floods of the decade in Africa's most populous country.

The family is now living in deplorable conditions in a crowded school near Ahoada, Rivers State, in southeast Nigeria.

According to records, more than 1,000 people have taken refuge in the classrooms of this makeshift IDP camp.

"I was afraid to die," says Ms. Lawrence, surrounded by about 20 children, in the middle of a classroom.

"Here, we have nothing. Not enough food, no diapers or mosquito nets. We need help," she says, her features drawn.

According to the authorities, the floods have killed more than 600 people and displaced 1.3 million since June across the country. In the memory of Nigerians, confirmed by the weather agencies, the rise in water this year is particularly meteoric. Much more than in 2012 and 2020.

Today, the South East is the most affected region.

In Rivers State, here and there, many crowded camps for displaced people are hosting those who were able to flee.

The others have stayed in the submerged villages and are sleeping where they can, in trees for example," says Obed Onyekachi, referring to several members of his family.

"It was impossible for them to come here. And how many others, swallowed by the waters, are missing?", asks the 32-year-old man, rage in his voice.

"The crops were destroyed. We have lost hope. Famine is coming."

Without a boat, moving from one state to another is impossible. The supply of food is laborious.

On the main road to the west, the current overturned a tanker. Several people died at this point, according to local residents.

Some people are still trying to cross on foot, with water up to their waist.

"I've been stuck on the road for seven days. We don't know how long it will last. Everything is devastated", laments Alamin Mohamed, 25 years old, who hopes to be able to cross soon by motorcycle.

The crowded boats, made of wood and, for the lucky ones, motorized, are shuttling back and forth. No one wears a life jacket.

On the right bank, the roof of a church protrudes from the dark waters, brushed by high-voltage electric cables.

The representative of the UN Food and Agriculture Organization (FAO) in Nigeria, Fred Kafeero, warned that the flooding increased the risk of diseases such as cholera.

At Ihuike Primary School, most of the students are sleeping on the floor, huddled together. Each classroom houses about 50 people.

A team of student volunteers cleans the premises and divides the meager food supplies sent by local authorities.

One of them, with a "Ekpeye students" T-shirt on his shoulders, worries about the risk of epidemics and infections.

"We need a clean environment. We pay attention to everything but we are exhausted," he said, speaking on condition of anonymity.

"Even the well water is contaminated." 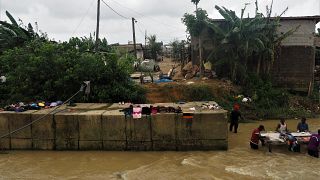