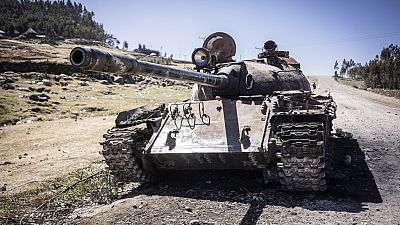 The Ethiopian government on Monday reiterated its willingness to hold peace talks but said it would continue military operations in the northern region of Tigray, a day after the African Union (AU) called for an "immediate" end to hostilities there.

In addition to the AU, the UN, the US and the European Union (EU) have expressed concern at a recent escalation in fighting in Tigray, a week after peace talks in South Africa were announced but finally postponed.

"The government is compelled to take defensive measures to protect the sovereignty and territorial integrity of the country" in the face of "repeated attacks" by rebel authorities in Tigray, in "active collusion" with "hostile foreign powers", the federal authorities said in a statement, without directly responding to the AU's call for a ceasefire.

"It is therefore imperative that the government of Ethiopia take immediate control of all airports, other federal infrastructure and facilities" in Tigray, they said, assuring, "while pursuing these objectives", that they were "committed to a peaceful resolution of the conflict through the AU-led peace talks".

According to Prime Minister Abiy Ahmed's federal government, "a comprehensive and negotiated settlement that brings lasting peace is necessary".

The AU Commission chairperson, Moussa Faki Mahamat, had called on Sunday for "an immediate and unconditional ceasefire", saying he was "gravely concerned by reports of intensified fighting" in Tigray.

The Tigrayan rebels were quick to say on Sunday that they were "ready to respect an immediate cessation of hostilities".

The conflict, which began in November 2020, is taking place behind closed doors, with northern Ethiopia largely off-limits to journalists.

But according to sources, Tigray is currently caught between a joint offensive by the Ethiopian and Eritrean armies from Eritrea in the north and Ethiopian troops assisted by forces from the neighbouring Amhara and Afar regions in the south.

- The UN, the United States and the EU were particularly alarmed this weekend by the situation in Shire, a town in Tigray with a population of about 100,000 before the war. Located about 40 km south of the border with Eritrea, it has been the target of intense bombing in recent days, according to humanitarian sources on the spot.

Two members of the NGO International Rescue Committee (IRC) - one of whom eventually died - were injured in shelling on Friday. Two other civilians died.

In its statement, the Ethiopian government said it "deeply regretted any harm that may have been done to civilians, including humanitarian personnel" and promised "an investigation into such incidents", without explicitly referring to the death of the IRC member.

He said that Ethiopian forces "strictly adhere" to international humanitarian law and "strive to avoid fighting in urban areas to avoid civilian casualties", referring to "strict instructions were given to reinforce this commitment".

At the same time, Addis Ababa called on civilians and humanitarian actors "to stay away from military installations" of the Tigrayan rebels, who have an "established pattern of using civilians as human shields and civilian installations for military purposes".

After a five-month truce that raised hopes of negotiations, fighting has resumed since 24 August in northern Ethiopia between the federal army - backed by forces from the Tigray border regions and the Eritrean army - and rebels from the breakaway region.

The outcome of this deadly war is unknown. But it has caused a humanitarian catastrophe, displacing more than two million people and plunging several hundred thousand Ethiopians into near-starvation conditions, according to the UN.

Denouncing the "indiscriminate attacks" by Ethiopian and Eritrean troops in Shire, the head of the United States Agency for International Development (USAID), Samantha Power, underlined "the staggering human cost of this conflict".