Political parties, social and religious groups and representatives of the security forces launched talks on Friday to chart the next phase in Burkina Faso's future after the country's latest coup.

The gathering of some 300 people in the capital Ouagadougou is taking place two weeks after the jihadist-torn Sahel state was rocked by its second military takeover in less than nine months.

The national forum is due to appoint a transitional president to rule before power is eventually returned to civilians.

Supporters of Traore are clamouring for him to be that man, although he has said he does not want the job.

Several hundreds demonstrated Friday in the capital to call for Traore to be appointed president.

"We want captain Traore or nothing," demonstrator Sayouba Ouedrapogo told AFP near the conference centre where the talks opened.

"We must set aside our differences ... and write a new page full of hope," the message said.

The forum is expected to adopt a charter for which a draft seen by AFP states that the presidential transition mandate will end with the inauguration of a new president after elections in July 2024.

One of the world's poorest nations, Burkina Faso has a long history of coups since independence from France in 1960.

The latest are rooted in unrest within army ranks over the jihadist insurgency that swept in from neighbouring Mali in 2015.

Traore has said Burkina will uphold a pledge that Damiba made for a return to civilian government by July 2024 at the latest.

Damiba fled to neighbouring Benin on October 2, after a weekend of violent protests that also targeted the French embassy and saw demonstrators raise Russian flags. 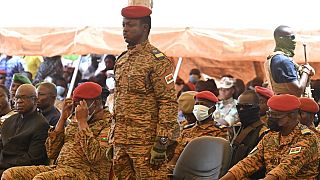