A former Liberian rebel is on trial in Paris on charges of crimes against humanity, torture and acts of barbarism during the West African country’s civil war in the 1990s.

Kunti Kamara, 47, is notably accused of “complicity in massive and systematic torture and inhumane acts” against the civilian population committed in Liberia's Lofa county in 1993-1994, as one of the leaders of the Ulimo armed group. He was then less than 20 years old.

He was arrested near Paris in 2018 and faces life imprisonment.

Rights groups hailed it as an important step to bring justice to victims.

It is "a victory for Liberian victims and a warning to perpetrators that no matter where they are, we’re going to make sure they’re held accountable for the crimes they committed in Liberia,” Hassan Bility, head of the Global Justice and Research Project, told the Associated Press.

Bility's nongovernmental organization is dedicated to the documentation of wartime atrocities in Liberia and to assisting victims in their pursuit of justice for these crimes.

Human Rights Watch and the International Federation for Human Rights (FIDH) stressed in a statement that Liberia’s first civil war was especially marked by "violence against civilians, as warring factions massacred and raped civilians, pillaged, and forced children to kill and fight.”

Elise Keppler, associate international justice director at Human Rights Watch, said the trial is especially important in the context of “the failure of Liberian authorities to hold to account those responsible for serious crimes during the civil wars.”

“France’s trial for atrocities in Liberia reinforces the importance of the principle of universal jurisdiction to ensure that the worst crimes do not go unpunished,” said Clémence Bectarte, a lawyer who coordinates FIDH’s Litigation Action Group, in a statement.

The country's post-war truth and reconciliation commission in 2009 recommended prosecution for dozens of ex-warlords and their commanders bearing the greatest responsibilities for the war.

But successive governments have largely ignored the recommendations, much to the disappointment and frustration of war victims.

Political analysts say this is mainky because some of the key players in the war have occupied influential positions in government, including in the legislature, since the end of the war nearly 30 years ago.

The current president, George Weah, spoke against impunity for war crimes when he was in opposition, but has shown reluctance to respond to citizens’ calls for the establishment of a war crimes court.

During her visit to Liberia last week, the U.S. ambassador on war crimes, Dr. Beth Van Schaack, promised her government would “100%” support Liberia if the country decided to establish a court to look into its past.

Expressing disappointment that Liberia is still lagging behind in fostering transitional justice, she assured Liberians she will recommend "that if something starts to move, that we should be a partner in that effort.”

The Paris trial, scheduled to last four weeks, is the fifth dealing with crimes against humanity and torture in France. Previous cases concerned crimes related to the 1994 genocide in Rwanda.

In a rare occurrence in France, the trial is to be filmed to constitute historical archives. 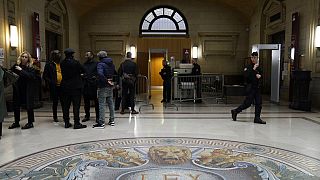