Sam Matekane, Lesotho's leader of the Revolution for Prosperity (RFP) party joined supporters Sunday (Oct 9) in the capital Maseru to rejoice over an early lead in the parliamentary race.

The 64-year old man, who’s believed to be the country's richest person, was considered a dark horse in this election.

The 64-year old man, who’s believed to be the country's richest person, was considered a dark horse in this election.

"Our young people, I want to thank you for making choice and showing that you are the people who want to take responsibility", Matekane told a young audience.

The main challengers in the polls included the All Basotho Convention party and the Democratic Congress party.

About 1.5 million people were registered cast their ballot on Friday (Oct 7) and chose a candiate of the more than 50 competing parties.

Turnout in the last elections in 2017 was only 47 percent, but some observers said the figure could be higher this year. Final results will be announced this week. 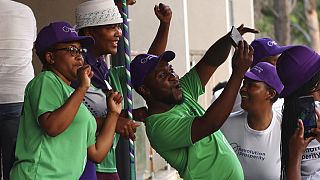