Thousands of Sudanese demonstrators took to the streets of the capital, Khartoum, on Thursday to demand an end to military rule and claim better living conditions.

Last month, army chief Abdel Fattah al-Burhan pledged in a televised address to step aside and make way for Sudanese factions to agree on a civilian government.

Civilian leaders have denounced the move describing it as a "ruse".

Military crackdowns on nearly weekly protests have so far killed 116 people according to pro-democracy medics.

Another demonstrator, Benz Rashid, added "any of these initiatives does not represent us as resistance committees in any way. We put these people in the lead to bring us justice and none of them did and we will only bring justice through the streets". 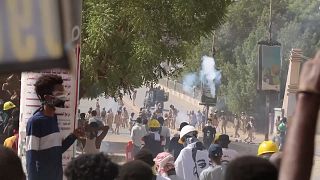