In a packed 30,000-seat Nyayo Stadium in Nairobi, Kenyan presidential hopeful, William Ruto, has been rallying his supporters.

The rags-to-riches businessman used to be seen as the establishment candidate but after losing the support of Uhuru Kenyatta he is now fighting back.

Ruto was once expected to be President Uhuru Kenyatta's successor, but Kenyatta aligned himself with longtime rival Raila Odinga in 2018 and since then Ruto has lost ground.

"They said this was a constitutional moment, we told them no, this is an economic moment," he said.

Ruto, has based much of his campaign on the idea of taking apart the old political order, led by Kenyatta and Odinga, and offering a helping hand to small businesses and poorer Kenyans. It is this section of the population where the bulk of his support comes from.

Nancy Njeri is a businesswoman and Auto supporter.

"He will create good business for the low level business people like women who sell groceries, hawkers who are always being harassed by the city council officers, he will serve us and fix the economy and that’s why we love him," she explains.

"I chose to support Ruto because I am sure when he is elected on the 9th of August to be the fifth president of the Republic of Kenya, he will identify and fix the problems,|" he says.

On Tuesday, as well as voting for the president, people will choose members of the National Assembly and Senate, county governors and members of the county assemblies. 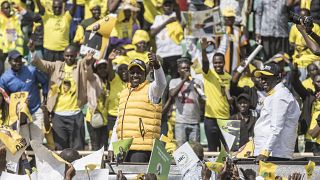