The forest fires that have been devastating wooded areas in northern Morocco since last week have been contained or under control since Sunday evening, according to local authorities.

One of the last outbreaks, which ravaged 500 hectares, half of which was forest cover, was brought under control on Monday in the province of Tetouan, near Tangier, local sources said.

During an intervention on Sunday in the same region, a Turbo Thrush spraying plane made an emergency landing, without the pilot being injured.

Elsewhere, firefighting teams dealt with the main fires, particularly in the worst-hit province of Larache, where one person died.

According to the National Agency for Water and Forests (ANEF), the total area damaged by the fires reached 6,600 hectares until Sunday.

For comparison, 2,782 hectares of forest had been destroyed by 285 fires from January to September 2021, especially in the mountainous region of Rif (north).

Twenty douars (villages) were evacuated as a preventive measure in often remote areas.

Morocco is not out of the woods, however, as the national meteorological forecast calls for a heat wave, with temperatures ranging between 41° and 46° until the end of the week in several provinces.

For Said Chakri, an environmentalist quoted by the MAP agency, these fires are largely due to human causes, but "the reality of climate change" has contributed.

In addition to five Canadair water bombers of the army and eight Turbo Thrush aircraft of the gendarmerie, 2,000 elements of the Civil Protection, Water and Forests, the Royal Armed Forces (FAR) and the gendarmerie, assisted by local authorities and volunteers were mobilized to stop the advance of flames.

For the first time, ANEF drones were used to detect the fires.

Morocco has been hit since last month by scorching temperatures, in a context of extraordinary drought and water stress.

On the other side of the Strait of Gibraltar, devastating fires continue to rage in south-western Europe, as a result of a heat wave that broke several temperature records on Monday, particularly in France. 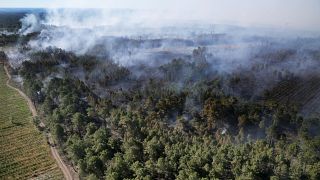