Southern Africa's second-largest oil and gas producer, Angola aims to be an energy superpower with an array of renewables including solar, wind and hydropower. International giants like TotalEnergies and ExxonMobil have been in Angola for decades, welcoming Angola's stable government with streamlined regulatory and tax policies. Along with the national producer Somoil, they are also developing renewable energies and cutting the carbon footprint of their petroleum production.

The International Energy Agency says Angola is set to become the largest crude oil producer in Southern Africa, with a foundation for renewable energy, through investments and supportive measures.

TotalEnergies is the largest oil and gas producer in Angola, where the government is encouraging more investment to expand that production.

TotalEnergies has been working in the country for nearly seven decades. Olivier Jouny, the company's Director General in Angola says a flexible policy approach on taxation and regulation in recent years has paid off.

"We have invested a lot. We now have a leading position in Angola, we represent 45 percent of the country's production."

"This is one of our largest subsidiaries since we have six installations, six oil platforms, six large vessels that produce in water depths between 1,500 and 2,000 meters," Jouny added.

ExxonMobil has been another major player in Angola, for more than a quarter of a century.

We have the biggest deepwater operation within the entire corporation." says Melissa Bond, General Manager, Exxon-Mobil Angola, adding: "It's very important to have stability, fiscal stability, legal stability, regulatory stability. And Angola has been able to demonstrate that through the time that we've been here."

"We were sending our Angolans for technical training overseas and we're very proud that because of that investment and the time that we have spent. Currently, 92 percent of our workforce is Angolan," explains Bond.

Like elsewhere in the world, the energy sector in Angola is also evolving to include more renewables and to reduce its carbon footprint. Angola's largest oil company Somoil, now 20 years old, is redefining itself.

"There's clearly a shift to renewables. One is solar, solar exposure. Angola has one of the best in Africa. And the second one is hydroelectric power. Plenty of rivers in Angola," says Somoil CEO, Edson dos Santos.

Total's Olivier Jouny also says the firm is aiming at a range of renewable power sources in Angola.

"Here in Angola, we see in particular a very strong potential for solar power. We currently have a solar project in the town of Lubango, in Huila province, in the south of Angola. We would like to decide soon on a 35-megawatt solar power plant."

In addition, Total says it is working on eliminating gas flaring and switching to renewables in its operations.

It's a policy the Angolan government is also pushing, says Paulino Jerónimo chairman of the Board of the National Agency for Petroleum, Gas, and Biofuels (ANPG), saying, "Our goal is to reach zero burn very soon."

Factors that will be necessary to create a future-proof energy industry in Angola.

"Solar exposure is tremendous. So hydroelectric power, another opportunity. So our geographical location also helps. Angola has all the ingredients to become truly an energy superpower in Africa," said Somoil CEO, Edson dos Santos. 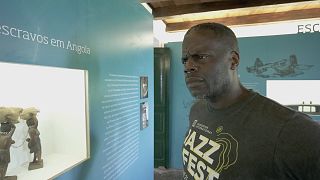