Athletics: Omanyala finally in the starting blocks for the 2022 Worlds

The African 100m record holder, Ferdinand Omanyala, has finally been granted a visa to the United States to compete in the World Athletics Championships in 2022.

He plans to fly out on Thursday evening and hopes to reach Eugene, Oregon in time for the start of his competition, which begins on Friday evening with the heats.

Omanyala experienced the equivalent of a false start. Early Thursday morning, he told AFP that he had to withdraw from the World Championships because he had not received his visa for the United States in time.

"Even if I get a visa today, it's too late," explained the third best 100m performer of the year with his 9 sec 85/100th in May behind Americans Fred Kerley and Trayvon Bromell.

"It would mean taking night flights and my competition starts (Friday). I'm done. There's nothing I can do," he added.

Omanyala, 26, quickly came to terms with the situation and even started looking ahead to his next big event of the year, the Commonwealth Games in Birmingham from July 28 to August 8.

"I will watch the races (at the Worlds) in Oregon, I hope it will go better for me at the next World Championships in Budapest in 2023," he explained.

Three hours later, a big surprise: his coach announced that his protégé had obtained his visa and would participate in the big event in Eugene.

"Omanyala was called to the Ministry of Sports this (Thursday) morning and received the visa to travel. He should take the flight this (Thursday) evening to arrive in Oregon tomorrow morning," Duncan Ayiemba told AFP.

Onto the next flight?? to Oregon.
Am positive that I will compete.
Thanks so much for your support and prayers. pic.twitter.com/dEuMygijjh

According to his coach, Omanyala could arrive in time for his first race, with the 100m heats starting at 6.50 pm local time on Friday (01.50 am GMT on Saturday).

"He will have a few hours to rest before competing in the 100m heats and maybe qualify for the semi-finals and finals" which are scheduled for Saturday, the coach said.

Is this the end of an eventful day? Nothing is less certain, but Omanyala, who became the fastest African sprinter in history in 2021 with his 9 sec 77/100th, is used to experiencing ups and downs.

At the Tokyo Games last summer, he was the first athlete from Kenya, a country known for its long-distance runners, to reach an Olympic semi-final in the 100m.

His rise over the past year has raised astonishment, sometimes even suspicion, for an athlete suspended for 14 months in 2017 after testing positive for the corticosteroid betamethasone. 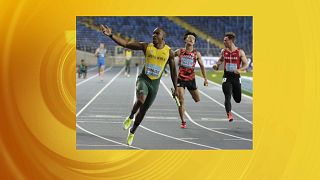