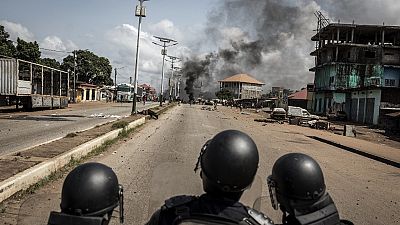 Seventeen police officers sustained various degrees of injuries following spontaneous violent demonstrations in Conakry on Tuesday and Wednesday that followed the brutal arrest of three leaders of a collective, the Guinean police said in a statement on Wednesday.

Clashes between police and youth groups broke out in suburban areas of the capital to protest against the arrest of members of the National Front for the Defence of the Constitution (FNDC), a coalition that had orchestrated months of mobilisation from 2019 to 2021 against former President Alpha Condé (2010-2021), who was overthrown in September 2021 by a junta led by Colonel Mamady Doumbouya.

The demonstrators burned tyres, erected barricades, overturned bins and pelted the police, who tried to disperse them with tear gas.

AFP reported that a precarious calm had returned to the capital on Thursday.

The spontaneous demonstrations are among the first in the context of protest since the seizure of power by Colonel Mamady Doumbouya.

The FNDC had called for demonstrations on 23 June, ignoring the ban imposed by the junta. It had suspended its call the day before the demonstration to "give a chance" to the dialogue proposed by the transitional government.

However, after the last meeting with the government, the FNDC denounced "a parody of a meeting", as well as "the solitary and authoritarian conduct of the transition" and "the serious attacks on fundamental rights and freedoms".

The national coordinator of the FNDC, Oumar Sylla - known as Foniké Mengué -, Mamadou Billo Bah and the rapper Alpha Midiaou Bah - alias Djanii Alfa - were violently arrested on Tuesday by police at the headquarters of their coalition, where they were holding a press conference. Mr Sylla and Mr Bah were beaten and their clothes torn by police officers.

They were still in police custody on Thursday, awaiting to be brought before a judge.

A large part of the political class condemned the arrest of the three men and expressed indignation at the method.

Mr Sylla and Mr Bah are being prosecuted for "producing and disseminating through a computer system insulting remarks against the National Transitional Council (CNT)", the transitional parliament set up by the junta, explained on Tuesday the prosecutor of the Conakry Court of Appeal, Alphonse Richard Wright, on the private radio Fim FM. 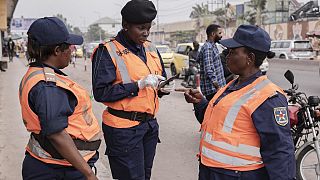 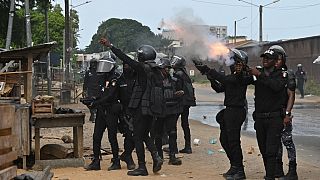