Ndop, a traditional fabric from western Cameroon was once only meant for the elite, but today, that is changing. At a funeral, Prince Fankam, a local royalty, is proudly showing off his ceremonial blue and white outfit and he explains why:"It was initially for princes and not even all the princes, only to those who had already been initiated. Today it belongs to everyone as it is sold on markets".

The fabric can be made out of many possible combinations of symbols and the manufacturing process is passed down through generations. Since February 2020, NDOP has been classified as a Cameroonian national heritage by the Ministry of Arts and Culture.

Solange Yougo is a specialist. She knows precisely which leaves of the raffia to take to embroider her fabric. "My mother taught me how to sew these two lines when I was younger. I was eight or nine years old. She would keep me busy, telling me not to do other things", says the 52 year-old tailor.

Some fear, however, the knowledge of its fabrication could disappear as it requires several days of work and is as the result can be expensive. An item can cost up to about 150 euros.

A purchase out of reach for a lot of Cameroonians living with less than two euros a day. In a country where the poverty rate is close to 40%.

Young Cameroonian designer Doriane Teguia tries to find ways to attract new customers. "We decided to upgrade Ndop fabric and modernize it because when things are a little too traditional, some people don't like it. This seduces people who like traditional and modern items. Those who prefer modernity can choose accessories looking this one for example.", says Doriane Teguia, Cameroonian designer.

The local association Save Ndop is asking for this textile tradition to be added to the UNESCO Intangible Cultural Heritage Lists. 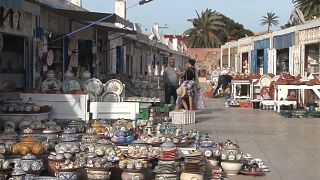 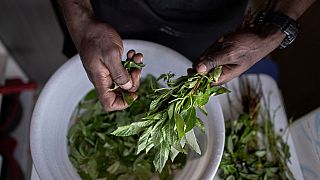 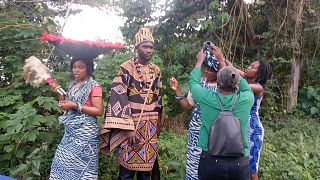