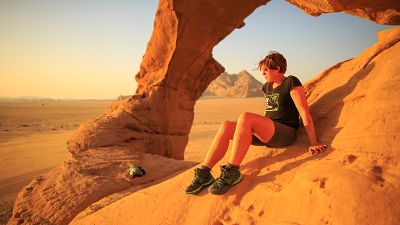 Welcome to Euronews Travel’s Women Beyond Borders, where we bring you women from across the world who are living brave, adventurous lives, and conquering personal challenges on the road.

While some are crossing the world in pursuit of the most unique experiences, or pursuing a lifestyle that many would dream of, others are breaking the mould of traditionally male-dominated industries. We hope the series inspires you to believe in the power of your own dreams.

Bex Band has had a huge variety of jobs. After university she worked in admin, as a personal assistant, as a charity fundraiser, in corporate video production and she even began training to be a teacher. What did she learn from all these experiences? That none of it suited her.

“I was really struggling to find work that I was satisfied with because I didn't have the confidence to go for things that really excited me,” Bex explains.

Cut to today and she’s an adventurer, writer, content creator, expedition organiser and founder of the UK’s largest female adventure group. So she still has variety but it’s all linked by one theme: adventure.

What can we learn from Bex about building a life that’s right for you?

“My biggest bit of advice for someone that might be struggling to find a career path that they enjoy or work that they love doing is actually just to start pursuing your passions and following things that really excite you,” she tells Euronews Travel.

Finding a path in life

When asked to look back, Bex sees the turning point in her life as when she first read about the Israel National Trail, a 1,000km ultra-long distance hiking trail spanning the length of Israel.

She has never done anything like it and didn’t even know something like that existed but felt naturally drawn to it as her husband is originally from Israel.

At the time she was halfway through her teacher training but something didn’t feel right about it. So she decided to take a chance on an adventure, something that finally excited her.

“I kind of threw myself into this [expedition] and just thought I'm going to do this, even though I was really unfit and really inexperienced,” Bex explains.

It took Bex 2 months to complete the hike. She says it was the hardest thing she’d ever done, but she also loved “living this simple existence of being in nature, not having all the stresses and strains of everyday life.”

“And that was quite an important discovery because then I realised ‘actually I want to share that and for other people to experience that too’,” she adds.

As Bex was drawn further into adventuring, she began taking courses to equip her for the journeys ahead.

Though she was determined to succeed, she often found the world of adventure to be very male-dominated and too focused on extremes and pushing boundaries.

“I think it was one of the first times in my life that I was really in a situation where I was experiencing overt sexism and it really knocked my confidence,” Bex explains.

The people she didn’t meet who changed her life forever

During her trek across Israel, she met many other travellers walking the same route. But not a single one of them was female.

She was shocked to find no other women wanted to attempt this amazing route. She decided something had to change.

“That inspired me to set up Love Her Wild, to create a different kind of space in the outdoors, one that was not competitive, that was supportive and put a bit more focus on just having fun so that women could perhaps start feeling inspired to get outdoors more and to perhaps make it easier to take those first steps into going on adventures.”

The defining moment that made Bex Band a full-time adventurer

The first expedition that Bex organised saw her and a group of women head to one of the UK’s most mountainous regions, the Lake District, in 2017. There, they would attempt to hike the equivalent height of Mount Everest in just five days.

Once the group had begun their expedition, they realised the gargantuan and unrealisable task ahead of them.

On one day, after marching up and down a steep section of mountain to try to quickly rack up extra metres, the women decided to continue the expedition but to abandon their unachievable task and just enjoy the journey.

“At the time I thought, ‘Gosh, this is it. No one's ever going to go on an adventure with me again.’, ” Bex tells Euronews.

“But actually, the opposite happened. And people that were following [online] saw what great friends we made on that trip and how we had such a good time, even though we didn't reach our goal.”

How can I get involved with Love Her Wild?

Love Her Wild is an adventure organisation for women, with local groups all across Britain.

Bex launched the group around 5 years ago, originally just setting up a Facebook group and inviting some friends. It’s now grown into a community of over 30,000 women.

The majority of what they do is still on the Facebook group and is full of women who are looking for buddies on their own mini-adventures. Or you can join one of the adventures organised via the group.

Love Her Wild also has funding and grants in place to try to break down as many barriers as possible for getting women outdoors. They help provide equipment to women that need it and support others to gain outdoor leadership qualifications.

“So actually it's really wonderful if you can train a woman who will then step into roles and then go and inspire lots of girls of the future.”

Right now, Love Her Wild is hosting its largest event yet - the End2End relay. It began on 16 June, starting in Land’s End, the southernmost point in the UK, and is a series of 74 day-long hikes, heading north to John O’Groats in the northern tip of Scotland.

The relay is raising money for The Woodland Trust which helps to protest the UK’s wild spaces. Though some days are already full, there are a few spots remaining in some legs of the relay so if you want to join in, be quick!

Watch the video above to learn more about Bex and Love Her Wild. 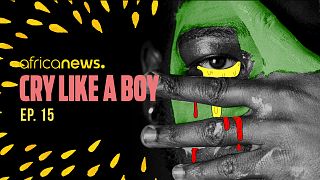