"We have the relic of our national hero. On the African level, we can say he is a pan-Africanist. He has been returned to us and today we are accompanying him, participant Kiso Kolo-Vira says in a voice filled with emotion. He is going back home and it is just exceptional. It was impossible not to attend. "

On Monday, Belgium handed to the Lumumba family what is believed to be the last remains of the slain Congolese leader.

In the embassy of the Democratic Republic of Congo located in Belgium, many from the diaspora came to sign the condolences book and pay homage to Patrice Lumumba."Lumumba, our fathers followed his politics, followed his ideology, so we grew up with this Lumumba spirit, Princesse Zikou dieka, a participant, says. Then, as nationalists, we keep the Congolese and African identity and we think that Lumumba is a good mentor whom we can rely on."

Patrice Lumuba was executed in 1961, aged just 35, with anti-colonial companions Maurice Mpolo et Joseph Okito. His body was cut into pieces and dissolved in acid. But a Belgian police officer kept two teeth as a trophy of his macabre execution. Two years ago, the federal prosecutor’s office said there is no absolute certainty that the tooth being returned is Lumumba’s since no DNA test could be conducted.

The tooth was seized by Belgian authorities in 2016 from the daughter of the policeman, Gerard Soete, after Lumumba's family filed a complaint.

The casket containing what is believed to be Lumumba's tooth is set to be flown back to the DRC where it will be officially laid to rest at a memorial site.

Lumumba's older son Francois filed a complaint in Belgium in 2011, pointing the finger of responsibility for his father's killing at a dozen Belgian officials and diplomats.

A Belgian parliamentary commission of enquiry in 2001 concluded that Belgium had "moral responsibility" for the assassination and the government presented the country's "apologies" a year later.

De Croo said Belgian officials "chose not to see, chose not to act" to stop the killing, even if they had not directly intended it to happen.

Lumumba's children were also received Monday by Belgium's King Philippe, who this month travelled to DR Congo to express his "deepest regrets" over the colonial past.

Historians say that millions of people were killed, mutilated or died of disease as they were forced to collect rubber under Belgian rule. The land was also pillaged for its mineral wealth, timber and ivory. 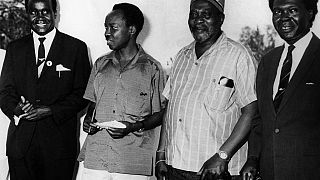