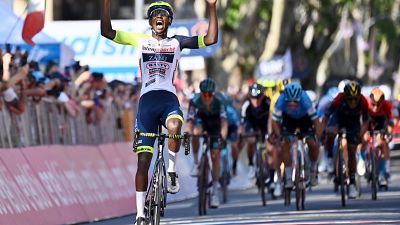 It’s been a season of firsts for Biniam Girmay, and the Eritrean rider added a stage victory in the Giro d’Italia on Tuesday in his first Grand Tour to raise the profile of African cycling.

The 22-year-old Girmay outsprinted none other than Mathieu van der Poel - one of the top riders in the sport - to win the 10th stage of the Giro.

Spanish rider Juan Pedro Lopez of the Trek-Segafredo team maintained his 12-second lead over Joao Almeida in the overall standings as the three-week race approached the halfway stage.

Romain Bardet is 14 seconds back.

A professional since 2020, he has eight victories to his name, including three in the current year alone. At the end of March, he became the first African to win a classic (Gent-Wevelgem).

Despite this win, Binian also suffered an injury from an unforeseen accident that occurred during the ceremony. Girmay was injured in the eye by a bottle cap he had just shaken and had to go to the hospital for treatment.