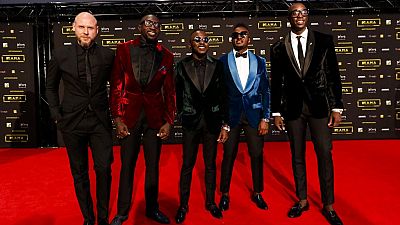 In a statement issued on Monday, May 16, Sauti Sol accused the Raila Odinga-led Azimio of using one of their songs, Extravaganza, as a soundtrack during the unveiling of Narc Kenya Party leader Martha Karua as the coalition's running mate.

Sauti Sol claimed that the action taken by Azimio’s campaign team infringed on their right to property.

"It has come to our attention that the Azimio la Umoja campaign have without license nor authority used one of our more popular original compositions, “Extravaganza,” as a soundtrack to the announcement post of the running mate,"

The music group sees the action as one which infringes on their fundamental rights to property and freedom of association.

"We are disappointed by the Azimio la Umoja Campaign’s blatant disregard of our right to control the use of our copyright. We shall be seeking legal remedy for this clear violation of our copyright," the band maintained.

Responding to the attempted legal suit, Odinga through his party – the Orange Democratic Movement (ODM) - argued that playing the song was a show of love to the music group.

We would like to assure our celebrated musical team @sautisol that we love them & appreciate their music so much.The group has carried our country’s flag so high in international fora & every Kenyan appreciates this. Playing their song yesterday was a show of love for their work.

Extravaganza song was released in 2019 where the group featured a number of artists including Nviiri, Bensoul, Crystal Asige, and Kaskazini.

Their statement comes days after the Music Copyright Society of Kenya (MCSK) confirmed receiving Ksh562,500 from Raila as license fees for music to be used in his campaigns, local media reports.