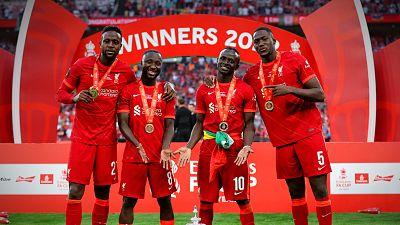 Liverpool has the eighth FA Cup it has waited 16 years to win after defeating Chelsea at the Wembley Stadium. The Reds can now concentrate on the Premier League and Champions League. One bad news is with Mo Salah, who suffered an injury in the first half of Saturdays FA cup final.

Liverpool missed the threat of the Premier League’s top scorer and Chelsea missed their chances to exploit that.

A late flurry of Liverpool attempts could not prevent the game going into extra time with the post hit by Andy Robertson from close range and a last run from Luis Diaz close to Edouard Mendy's goal.

Meanwhile in Germany, striker Erling Haaland was given an emotional goodbye in his final match for Borussia Dortmund before his move to Manchester City.

But Haaland could not leave Dortmund without scoring his 86th goal in 89 appearances. He scored a penalty to equalise before 17-year-old cameroonian Youssoufa Moukoko struck with a winner in the 84th.