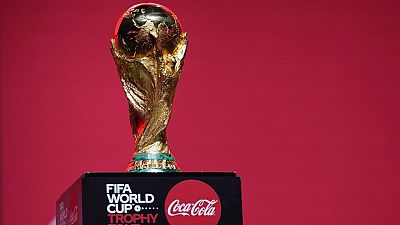 The global journey kicked off in Dubai on Thursday, May 12 and will have the two soccer icons visit all the remaining 31 countries that have qualified for the 2022 FIFA World Cup to be staged in Qatar in November this year.

“The FIFA World Cup Trophy is one of the greatest symbols in sport…Bringing it on tour gives us a unique opportunity to shine a spotlight on the fantastic communities around the world who love the beautiful game,” Romy Gai, FIFA’s Chief Business officer said.

Kaka won the World Cup with Brazil in 2002, while Casillas was part of the star-studded Spain side that conquered the world in 2010.

A magical day with Trophy Tour Ambassadors @kaka & @ikercasillas at the first stop of the @fifaworldcup #TrophyTour as we embark on a journey encompassing 51 countries including all 32 qualifiers#BelievingisMagic pic.twitter.com/a5rTUTxV7W

The former Brazilian midfielder said it was a dream come true to tour the world with the World Cup trophy.

Kaká said: “It is an incredible honour to be part of the first stop of the FIFA World Cup Trophy Tour by Coca-Cola. My first FIFA World Cup as a player was when I was just 20 years old, and it is still fresh in my mind – for me, it was a dream come true.”

Added Iker Casillas: “It was the highlight of my career when I lifted this very trophy as captain of Spain in 2010. And it is exciting that someone will have that feeling in Qatar later this year. It fills me with great pride to join all of you today, as we kick off the journey of the FIFA World Cup Trophy, bringing it to the fans across the globe.”

Meanwhile, Cameroon, Morocco, Tunisia, Ghana and Senegal will be in the race to win the world cup.