DRC: Explosion in a military camp in Goma kills at least 6

An explosion killed at least six people and wounded three others in a bar in the Kantindo military camp on Thursday night in Goma, the capital of North Kivu in eastern DRC.

Among the victims, two senior officers of the Congolese army and three women and a child.

Emotions were still running high on Friday morning. The relatives of the victims, still in shock, call for serious investigations.

"I appeal to the head of state because he is our head of state, he is the supreme commander. Let there be a diligent investigation, and let us find the people who did this to my family" demanded Maître Léopold Baguma, a relative of a victim.

"My neighbour is a colonel who died with his wife and child, it's really sad, we are suffering a lot, may God console us" said another friend of one of the victims.

This morning, the military governor of North Kivu told the press that the origin of the explosion has not yet been determined.

The governor assured the population that the authorities were doing everything possible to shed light on the events.

"In view of the impact of the explosions, I believe that it must be an improvised explosive device. Only scientists will be able to determine what the device was", said the Governor of North Kivu, General Constant Ndima Kongba.

North Kivu Province has been under siege for more than a year due to the activism of national and foreign armed groups.

This is not the first such incident. In June 2021, a child died and three other people were injured in a fire near the North Kivu military auditorium in the same camp.

A fire in a house caused the explosion of an ammunitions depot. 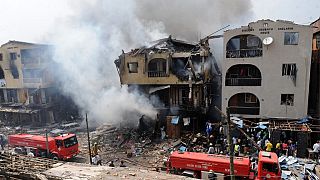