Through his art, the artist Jaeraymie, is reinventing the life of French politicians on election posters. With the country's presidential election swiftly approaching, Jaeraymie's work has been focusing on the candidates.

In his city, Paris no one is spared. Not even the actual French leader Emmanuel Maron who can bee seen on this poster with a black eye and a yellow vest. An allusion to police brutality denounced during the protests which took place during the Macron's presidency, between November 2018 and the beginning of 2020.

"The idea of the project is to paint people, political figures, who stigmatise groups, populations. I was touched by what these candidates said during their campaigns, and I decided to make a kind of response, an artistic response with paintings. These posters are the result of my paintings , which are therefore in the fictional narrative continuity of what I wrote around each character." said Jaeraymie.

Among the hacked election posters, the right-wing candidate Valérie Pécresse is presented as a defender of the same-sex marriage showing off a crown of flowers and the far-right candidate Marine le Pen, is wearing a hijab, in her invented life in wich she would have converted to Islam.

"This representation of Marine Le Pen as a Muslim, allows us to look at Muslims in a different way. In fact, this character is not the real Marine Le Pen, it's a fictional Marine Le Pen who had another life and decided to convert to Islam, who discovered her faith and who, as a result, put her work as a lawyer at the service of refugees." he described.

Over a year of work and preparation were necessary for the artist to develop this project, which in some cities has caused controversy. In Amiens, in the North of France, the city where Emmanuel Macron grew up, the portrait of the head of state in a yellow vest has been covered several times and some have seen an incitement to hatred. Even if these posters are not unanimous, one thing is sure, they leave no passerby indifferent. 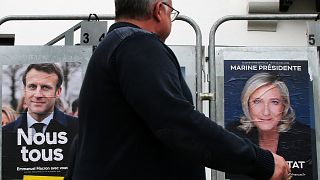