The war between Ukraine and Russia could mean that nearly one in two Sudanese could go hungry this year according to NGO Save the Children.

The conflict opposing the main exporters of wheat could have devastating conseauences on Sudan. That is what David Wright of Save the Children fears. He says, families may resort "to bad coping strategies" like forcing children to drop out of school or marrying off teenage girls.

By the end of the year, the head of operations of this NGO assures AFP, "20 million people will be food insecure" out of 45 million Sudanese.

On the one hand, because "86 to 87% of the country's wheat comes from Russia and Ukraine", and on the other, because the conflict has caused world prices to soar beyond the records set in 2008, which had already led to food riots.

According to the UN, one in three Sudanese is already in need of humanitarian aid in a country where inflation is approaching 260%. The currency has inexorably fallen and the price of bread has risen tenfold since the October military coup.

Worse still, Washington, which had sent 300,000 tonnes of wheat in 2021, will not send the 400,000 tonnes promised in 2022. "The combination of all these events" will lead to "the serious deterioration of a situation that was already not good", says Mr Wright.

A week ago, UN Secretary General Antonio Guterres warned of the risk of "a hurricane of famine" in many countries, citing Sudan in particular.

With the war in Ukraine, humanitarian aid could be redirected this year to Europe, where the UN estimates that 12 million people in Ukraine will need protection, as well as four million others who have fled to neighbouring countries.

"We see a wonderful solidarity among Europeans," says Mr Wright, "but our concern is that a lot of the money in the global humanitarian system will be absorbed", he says.

"We hope it won't affect our budgets, but it may: we may have less money invested in Sudan or elsewhere even as the situation worsens with inflation" rising around the world, he adds.

Those who will suffer most are the country's 3.3 million displaced people, mainly in the conflict-ridden western region of Darfur, as well as the one million refugees from neighbouring South Sudan, Ethiopia and Eritrea, also plagued by violence, Wright warns.

"If you are a Sudanese living in an IDP camp in al-Geneina, Darfur, it will have a double impact on you," he says. "On the one hand, your situation will get worse and on the other hand, there will be fewer resources to help you." 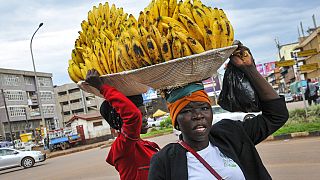