The red, blue, yellow and green flag of Mauritius was raised on the Peros Banhos atoll in the Chagos Islands, on Monday, February 14.

Several Chagos islanders together with Mauritian officials on a voyage that also involved a scientific survey of a nearby coral reef set foot on the atoll, which saw no native since Britain evicted residents in the 1960s and 70s.

Chagos islanders who were forcibly displaced by the British authorities to other parts of the archipelago nation of Mauritius have been fighting for decades.

Mauritius Prime Minister hailed Monday's visit "very emotional" and "historic". Britain’s Foreign Office said the UK "had no doubt as to its sovereignty" over what they called the British Indian Ocean Territory.

In same-recorded message, Mauritian PM Pravind Jugnauth said if the UK removed the flag, it would be interpreted as a "provocation".

In 2019, the International Court of Justice and the United Nations told Britain to give up control of the islands but the non-binding resolution was not upheld.

The islands were separated from Mauritius by the UK in 1965. The former colonist bought the territories and then leased it to the United States to set up a military base. Ever since, the dispute has opposed the countries.

In 2020, Britain said it would "cede sovereignty of the territory to Mauritius when it is no longer required for defence purposes." 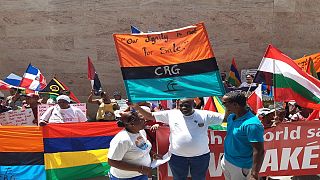 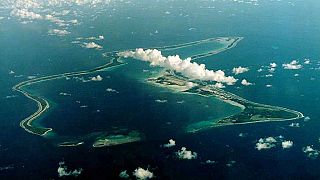 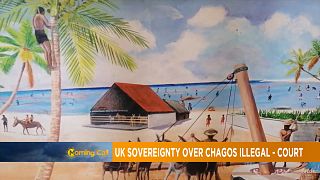