"It's hard to eat here. There are no fields and no food. Life is hard," says Albertine Nzale, traditional chief of Kinduti, on the outskirts of the DR Congo capital, Kinshasa.

The village sits at the end of a bumpy track through the savanna outside the largest city in the Democratic Republic of Congo.

There are no grain stores in its straw-roofed huts, no crops or farms along the 35-kilometre (22-mile) dirt road through the grassland. Just men pushing ancient bikes loaded with sacks of charcoal under a sweltering sun.

Albertine, 80, is worried for the village's future and wants help.

"We don't have a school or a hospital," she says. "We need tools and farm machinery to cultivate the land."

In November 2021, the UN's World Food Programme (WFP) and Food and Agriculture Organization (FAO) said the food crisis in the DRC touched a quarter of the vast country's population -- nearly 27 million people.

And those suffering were not just in the country's conflict zones in the east, but in and around the capital to the west.

Kinduti nurse Neron Mokili acknowledges that wild pigs sometimes destroy land around the village. But he also blames the food shortage on "lazy and impatient" locals who prefer to produce charcoal than till the soil.

"Not everyone in Kinduti owns land they can farm. They have to buy food from the people who do own the land. Except most people haven't got enough money," he explains.

Covid restrictions -- lockdowns, curfews, markets shutting down -- have added to the economic woes of this already fragile region.

Last year, the WFP teamed up with UN children's agency UNICEF and the government to help locals buy food. Between March and December 2021, they gave at least $402 (354 euros) in cash to 21,000 households.

Some, like food stall holder Elisee Nguza, managed to invest some of the cash in more long-term, income-generating activities.

"Things were really difficult during lockdown. There just wasn't any money around. The WFP cash helped me pay the kids' school expenses and build my business up," explains the 48-year-old mother of five.

Both Nguza and village nurse Mokili, who also runs a chemist shop, say they have invested in farming.

Pululu Maimona, a farmer who owns 20 hectares of forest and has ambitions of starting pig production, poured his aid cash into a fish-farming project he started in 2019.

"If people work hard, we won't have this food shortage... I don't just work for my family. I work for the community. As they say, when one person works, several get to eat".

The WFP says Nsele district, where Kinduti is situated, faces food "stress", meaning locals have to sacrifice other basic needs in order to afford food.

"We're not strictly talking of famine here," explains Vaultier, but with 75 percent of people "have difficulty" getting enough to eat, "famine is only one step away".

"Projects like ours try to stop them tipping over that edge." 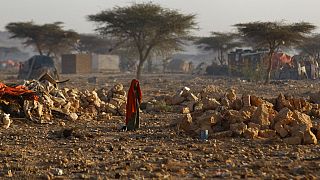