Jessica Ata hasn`'t been to River Aswa since 2014, when she was diagnosed with river blindness.

Back then, 1.5 million people in Uganda were affected by onchocerciasis that is carried by the blackfly.

The vector thrives along water rapids like this one that runs through several districts.

With the return of rains, there has been a surge in black flies.

The community just outside the city of Gulu is in fear, haunted by a tropical disease that has permanently impaired the vision of many in the region.

“I sometimes feel a buzzing sound in my ears. My head hurts like I am being hit”, says Jessica Ata referring to her condition.

Ten years ago, Uganda had successfully interrupted the transmission of river blindness with aggressive initiatives including deploying airplanes to spray chemicals that killed black flies. Now experts are worried there could already be cases.

“We have taken long without conducting the spraying and as a result they are having good breeding ground and possibly that could explain why the numbers of black flies are increasing. And it is all worrying us, first of all it indicates that we are at a very high risk of getting river blindness again – resurgence of river blindness in the region”, said Dr. Kenneth Cana, aciting district health officer for Gulu.

Even worse, scientists have suggested black flies may be the cause of nodding syndrome but available data is not conclusive.

Villagers who inherently depend on this river must find ways of avoiding the deadly bites.

“Children who come here to do swimming and fishing, those ones are highly affected because when you come to the river in the morning you can get the flies when they are still in an open place", says local leader of Paget Parish, Ongwec Phillips Agela.

“With the sun above my head, you can`t see swarms of black flies until later in the day when the temperature drops. And there have also been community interventions like slashing and clearing breeding sites, and the installation of trapping nets along the river bank.”

The government conducts mass drug administration twice a year to treat river blindness and has achieved 90 per cent treatment coverage in rural areas. But still, thousands of people near the river are at risk of infection from the increasing blackflies". 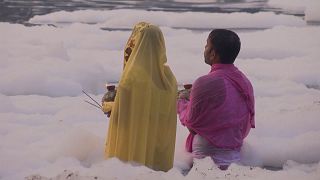