COP26: "Africa can become a leader in the energy transition" 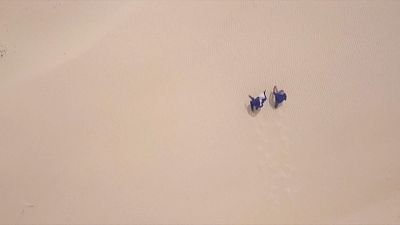 The UN climate summit, COP26, opened its doors this Sunday in Glasgow, Scotland. Many are calling it the summit of the last chance. The goal is to keep global warming below 1.5 degrees.

But for some countries this will be too much.

Thomas Sberna, is the Regional Coordinator for Coastal and Ocean Resilience for IUCN.

He is based in Nairobi, Kenya. He gives us an overview of the climate emergency on the continent.

"There are certain regions of the continent where temperatures are going to rise one and a half times faster than on the rest of the planet, where we are also going to have a lot of drought, and even major floods that will directly affect local populations, but also agriculture, economic activities and ecosystems on a daily basis.

This means less drinking water during major droughts, with effects on the health and even the lives of the populations. Agricultural production will yield much less, leading to more and more recurrent famines. It also affects the natural ecosystems that used to produce food for these local populations, for example, fish for coastal populations. They will have less and less access to these resources. This means that their lives are directly affected.

Under these conditions, is it still possible to go backwards?

The reality is that it is not possible, really, to turn back. There is in fact a kind of inertia in the climate that means that what has already been emitted will have an effect on the climate for hundreds of years to come.

The reality is that, for the moment, we still have a very short window of opportunity to avoid the worst. This means that we are not going to go backwards, but that we are going to avoid scenarios that would become unbearable for local populations, with terrible impacts on the continent and the rest of the planet.

It is difficult to focus on environmental issues when the first priority is survival. Africa is the co ntinent that produces the least greenhouse gas emissions, yet it is being asked to make the same efforts as other continents that have been able to rely on fossil fuels for their development.

For some, Africa should be allowed to catch up.

Europe has already gone too far with a system that, as we can see, no longer works and is not sustainable. We will have to go backwards and then change everything in the way we live and get back on the right track.

Africa is not yet too committed to this path, so it will be much easier for the continent to make this ecological energy transition. In addition to this, Africa has the incredible advantage of its youth and the average age of its population. A population that is also very proactive, committed, and aware of these issues, with an energy and a desire to take its future in hand.

Today, there are all the ingredients to ensure that Africa becomes the leading continent on this issue.