The head of Sudan's Sovereignty Council called for unity on Tuesday after a reported failed coup attempt by a group of soldiers.

General Abdel-Fattah Burhan made the plea during a visit to a military base in Khartoum.

Despite the attempted coup, the country's ruling council and military remain in control. It did however underscore the fragility of Sudan's path to democracy, more than two years after the military's overthrow of longtime autocrat Omar al-Bashir amid a public uprising against his three-decade rule.

A military official said an unspecified number of troops from the armoured corps were behind the attempt and that they tried to take over several government institutions but were stopped in their tracks.

The official, who spoke on condition of anonymity because he was not authorised to brief the media, said over three dozen troops, including high-ranking officers, have been arrested.

"Today we woke up to the sound of military music on the radio and on television. We were surprised by an action taken by a group of soldiers seeking to seize power. As a Sudanese citizen, I completely reject this path. We seek democracy and a democratic transformation, as the country is now in a state of stability." Al-Tayeb Abaidi, Sudanese citizen.

"Looking at the country's economic situation, the current collapse and the security chaos, seeing someone announce taking over the country in the name of a tribe while the government is not able to do anything, pushes the citizen to expect anything to happen." Abdel Hafez Al-Safi, Sudanese citizen 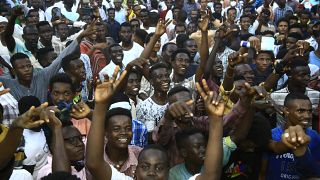