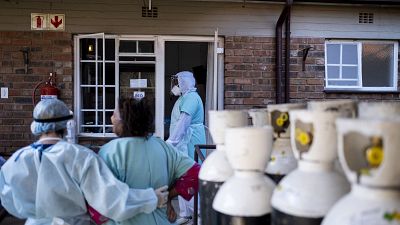 Covid-19 is surging in Africa with a record average number of new cases according to an AFP tally based on official sources on Tuesday at 1815 GMT.

It said 6,009,854 cases have been officially counted in Africa's 54 nations and territories since the virus was first discovered in December 2019 in China.

The number of new cases is growing at more than 41,400 per day - a 13 percent increase over last week and a rate not yet seen on the continent.

The number of confirmed cases only reflects a fraction of the actual number of infections, with different countries also having varying counting practices and levels of testing. Lack of testing capacity can mean that statistics are underestimated.

The number of new infections has been on the rise in Africa since mid-May.

Libya has seen the fastest growth with 1,560 new daily cases, a jump of 260 percent.

In terms of the total number of new cases detected, South Africa is the most impacted country with 2,219,316 cases. It accounts for 45 percent of new cases counted on the continent each day.

However, the number of new daily cases in South Africa has been decreasing in recent days, down 6 percent with 18,340 average daily cases.

The country reached its peak between July 2 and 8 when a daily average of 19,956 cases was reported.

After South Africa, Tunisia is the second country with the most new cases with 7,820 cases per day on average, an increase of 47 percent.

With the Delta variant is highly present in the country, the World Health Organization told AFP that "the health situation is serious and all indicators are red".

In general, Africa suffers from an unequal distribution of vaccines across the world. Per 100 inhabitants only about 4 doses have been given across the continent while in Europe, nearly 72 have been administered according to an AFP tally based on official sources.

On a global level the pandemic is subsiding only in Latin America and the Caribbean where contaminations are down 7 percent compared to last week.