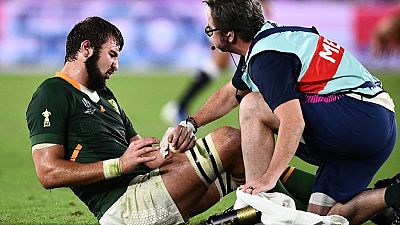 Rugby World Cup winners South Africa have gone into isolation for a second time in as many weeks after lock Lood de Jager tested positive for coronavirus on Monday.

A South African Rugby statement said "Lood de Jager retuned a positive outcome in scheduled testing and, because of his close contact with a number of squad members, the entire group has gone into isolation."

It later emerged that Jantjies' result was a false positive and he came off the bench in a 40-9 win against Georgia last Friday.

The countries are due to meet again this Friday in Johannesburg with South Africa preparing for a Test series against the touring British and Irish Lions on three consecutive Saturdays from July 24.

Coronavirus has wreaked havoc with the Springboks, forcing them to cancel all 13 home and away Tests scheduled for last year.

The match against Georgia in Pretoria last Friday was the first for the world champions in 20 months since they defeated England convincingly to win the Rugby World Cup a record-equalling third time.

Springboks head coach Jacques Nienaber reacted to the initial isolation by saying he did not believe the Lions tour was in jeopardy.

"There is no Springbok player who does not want to participate in this tour because it is so special, coming around just once every 12 years.

"I am not an expert in Covid, viruses and virology, but we are trying to mitigate the risks of infection and adhere to the health protocols.

"With a virus, I do not think you can completely take away the risk of contracting it, but the precautions being taken to keep us as safe as possible are magical and we are abiding by them."

Both the Springboks, Georgia and the Lions are staying in bio bubbles and leave them only for training, matches and travel.

South Africa is the African country most affected by the pandemic with 2,062,896 recorded cases and 61,840 deaths by Sunday night.