Experts are trying to figure out why Covid seems relatively absent in Kinshasa, the bustling, chaotic and overcrowded capital of the Democratic Republic of Congo.

But for many inhabitants, the city has been spared either through a miracle or -- in their view -- the disease was not as dangerous as billed.

"Covid in Kin? It doesn't exist," is heard around the sprawling city, where cases of the coronavirus were first reported more than a year ago.

"If Covid was really here, we would all be dead!" contended Lonzo, a hawker at a popular market.

"In the streets, on the buses, at home, we all live stuck together, trapped," he added, gesturing at the teeming crowds and the noisy traffic jams.

Resourcefulness is vital for daily life in poor districts of Kinshasa, which are often lacking water and electricity.

The poor wage a never-ending struggle for survival in the city's dilapidated, dirty and polluted townships.

Population estimates range from 12 and 17 million in the city that never sleeps.

Kinshasa has been called "the Leopard City" because residents must always be ready to defend themselves from attacks -- or pounce when necessary.

When the coronavirus arrived from Europe in sub-Saharan Africa's second-largest city in March 2020, residents feared the worst.

But cases were concentrated in the Gombe business district.

Many of the disadvantaged came to view the virus as a distant evil, a disease of rich Congolese and white migrants limited to the "Republic of Gombe".

"Covid should have devastated us. But so far, we have been spared," said Aimee Rugambo, a nurse at a government Covid treatment centre at Vijana hospital.

"God is in control! He protected us," she said.

But "we must tell people that Covid exists," she warns. "It is in Kinshasa, and it kills."

The figure, if credible, is negligible in a gigantic country that has suffered war and suffering for the past three decades.

"We will never know the number of infected or dead from corona -- most are not tested," a Congolese journalist noted. "It's too complicated or too expensive."

Grappling with so many other scourges on a daily basis, "you only go to the hospital if you are seriously ill," he said.

Kinshasa residents typically try home remedies and "saunas" -- inhalations -- if they ever catch a suspicious fever.

"Given that (Covid) often occurs without symptoms and there have been few deaths recorded, people still find it difficult to believe in it," said Jules Mongomba, Covid supervisor in the municipality of Linguala.

"With our living conditions, we could also conclude that we may have developed a certain resistance," he mused.

At the national level, many questions remain, concerning the porosity of borders, reliability of the test programme, meagre oxygen stocks and the point of a loosely enforced curfew imposed only in the heart of Kinshasa.

The only protective measure is a mask required in a few stores and administrative premises in the city centre.

Vaccination is free and open to all, but the campaign is not taking off. At the weekend only 11,000 people were reported vaccinated in Kinshasa, of a national total of 14,434.

"Many are afraid, mainly because of the rumours on social networks."

Only two people showed up for the jab at the Vijana treatment centre, both from the Indian subcontinent, who declined to speak. The day before, no one came, but for now it is mainly foreigners who are benefiting from it.

"Few people come... it's a shame," Dr Nice said, fearing that some doses will have to be destroyed because they have gone beyond their expiry date.

On May 10, the government announced the detection of five cases of the feared Indian variant in Kinshasa itself.

"The Indian variant is already in the Congo," President Felix Tshisekedi warned. "We in Africa have received God's blessing. We have not had as many deaths as in Europe or America. But beware, the situation is changing."

For caregivers, the lull observed since February is over. "The cases are increasing," worries Dr Nice.

In his eyes, "the third wave has already started." 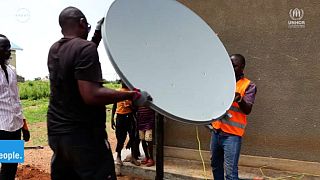