Spain’s Prime Minister Pedro Sánchez stated Monday that Madrid will defend both its interests and that of its ally’s Morocco within the scope of the European Union.

This comes after recent diplomatic tensions between the two countries saw the sudden arrival of at least 8,000 migrants in Spain’s north African enclave Ceuta and a repatriation response criticised by human rights groups.

The series of events saw bilateral relations between Morocco and Spain dip to a decades-old low over migration and Western Sahara.

The Spanish Prime Minister has issued the following public statement.

Over 800 unaccompanied migrant children are still in government and charity shelters in Ceuta.

Rabat recently recalled its ambassador from Madrid after Spain provided medical treatment to Brahim Ghali a founder and the current Sahrawi head of the pro-independence Polisario Front for Western Sahara.

The disputed region annexed in the 1970s by Morocco.

The North African nation's authorities are now urging Spain to have Ghali face justice for alleged crimes of genocide and against humanity brought against him by pro-Rbat groups.

Ghali is currently recovering from coronavirus-related complications in a hospital in northern Spain where he arrived under a different name with an Algerian passport.

Spain says it has the right to provide Ghali with humanitarian help -- and yet at the same time, critics question its recent mass repatriation of migrants that has left hundreds of minors separated from their adult caretakers dwelling in unideal conditions. 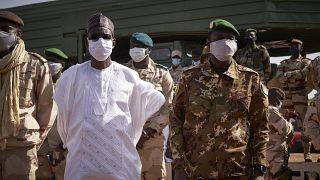