General Idriss Déby Itno, a military powerhouse and one of Africa's longest-serving leaders was born in 1952 into a family of herders of the Zaghawa ethnic group in northeastern Chad.

A young Déby joined the army In the early 1970s when the country was in the midst of a long-running civil war to later leave for France where he obtained a military pilot license.

His return in 78 saw him get behind Hissène Habré -- then serving as prime minister, who was also head of one of the rebel groups.

Déby was instrumental in the coup that brought Habré to power in 1982 -- distinguishing himself a brilliant military strategist which garnered him the position of Commander-in-Chief of the armed forces.

Relations soured with Habré and the young militant with political aspirations fled into exile before returning to N’Djamena in late 1990 to seize power by force.

A national conference was held in 1993 to establish a transitional government, and Déby was officially designated interim president.

1996 saw a new constitution approved, and Déby was elected president in the first multiparty presidential elections held in Chad’s history -- albeit amid allegations of electoral fraud.

A position he would occupy for the next three decades -- attaining re-elections under similar controversial political circumstances during his lifetime presidency.

When Déby was reelected in 2001, it was again amid allegations of widespread voting irregularities.

A 2005 constitutional referendum that eliminated presidential term limits was denounced by critics as another means of supporting the president’s increasingly autocratic rule. Nonetheless, the referendum passed, clearing the way for Déby’s reelection in 2006 in a poll that was boycotted by most of the opposition.

He was reelected in 2011, again in a poll that was boycotted by the country’s most prominent opposition figures.

Nevertheless, in his later years Cerca 2011 as Chad's leader, President Idriss Déby Itno was internationally lauded for building a formidable army, known as one of the most capable in Africa.

Forces considered indispensable in the fight against terrorism who have intervened in the Central African Republic confronted Al-Qaeda in the Islamic Maghreb in Mali and won significant battles against Boko Haram.

Throughout his presidency, Déby repeatedly faced resistance in the form of coup attempts and rebel activity that ultimately saw the end of his life on the battlefield -- true to his legacy as the Chadian military strongman that he was, to many both on the African continent and within the international community. 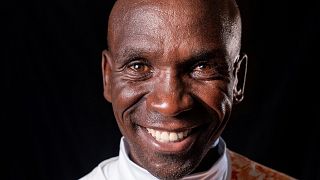