Ten burly Senegalese wrestlers raise a chant, singing "Mother, pray for us," while jogging up and down a sandy field by the Atlantic Ocean.

Training has resumed after a year of coronavirus-related restrictions that had stopped them from practising their sport.

Wrestling in the West African nation is a centuries-old tradition rooted in harvest festivals and draws a fanatical following.

Hulking fighters dressed in loincloths face off in packed stadiums, performing mystic rituals in the sand before going toe-to-toe.

On Sunday, the first major bout since the start of the pandemic will take place in a 20,000-seater stadium just outside of Dakar.

"This fight is of huge importance to me," says Eumeu Sene, 42, one of the men training in the suburb of the capital Dakar.

A former national champion once crowned 'King of the Arenas,' Sene is hoping to make a comeback in his match against a fighter known as Lac 2.

There are five separate bouts on Sunday's fight card, but this one is the main draw. Panels advertising the event line the streets.

Gaston Mbengue, the fight promoter, told AFP that there had not been a clash of this level "for years".

Such fights can grind daily life to a halt, with many people glued to television sets to watch wrestlers spar and attempt to throw each other to the ground.

But Senegal's fans have been deprived of the spectacle since the onset of the pandemic last year when the government banned wrestling matches and training sessions in professional stables.

At the training session in the Dakar suburb of Petit Mbao, barrel-chested fighters grapple with each other until a call to prayer interrupts them.

Sene, whose real name is Mamadou Ngom, won the prestigious King of the Arenas title in 2018 but lost it the following year.

A victory against Lac 2 would allow him to joust for the title again.

Like Sene, many wrestlers go by evocative nicknames, such as 'John Cena', after the American professional wrestler; or simply, 'Building'.

Sunday's fight will take place in front of 10,000 spectators, the stadium at half its capacity to try to avert coronavirus infections.

Khalifa Ababacar Niang, the head of the wrestling stable that includes Sene, said that few are allowed to approach wrestlers ahead of bouts, for fear of black magic.

"We are very careful about strangers," he explained, adding that some spells can render fighters lazy or dizzy.

Niang underlined that allowing AFP to interview his prizefighter was a rare privilege.

Mysticism plays an important role in traditional wrestling in Senegal.

They coat their bodies in a liquid deemed to be imbued with magical properties and then face off in the arena, serenaded by "griot" singers.

With the return of the season, many wrestlers in this poor nation of 16 million people are hoping for a boost to their incomes.

Coronavirus restrictions put some 8,000 professional fighters out of a job, according to Senegal's national wrestling association.

Nicknamed "Sadio's Son," Ndiaye added that he hopes to make a full-time living from wrestling one day. "Right now, I need another job to get by," he said. 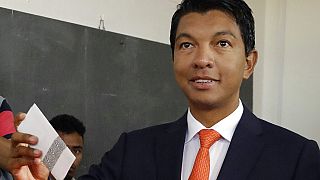