Niger's President Mahamadou Issoufo has won this year's $5m Ibrahim prize for Achievement in African Leadership for his work in promoting economic progress and joining regional efforts to quell the threat of Islamist militants.

Issoufou was first elected in 2011 and re-elected in 2016. He stepped down after serving two terms, unlike other African leaders such as Guinea's Alpha Conde and  Ivory Coast's Alassane Ouattara, who pushed through changes to the constitution to run for third terms.

"In the face of the most severe political and economic issues, including violent extremism and increasing desertification, President Mahamadou Issoufou has led his people on a path of progress," said Festus Mogae, chair of the prize committee and a former president of Botswana.

The number of Nigeriens living below the poverty line has fallen to 40% from 48% a decade ago, Mogae said, adding, that the country had also made progress in improving opportunities for women.

Issoufou is set to be succeeded by the former interior minister, Mohamed Bazoum, who won the presidential election in February.

He said in a tweet the prize "honours all Niger-iran people."

"I consider this award an encouragement to continue to think and act in such a way that promotes democratic values and good governance, not only in Niger, but in Africa and around the world," he added.

He is the sixth African head of state to win the award, which is paid out over 10 years.

The prize is founded by telecoms tycoon Mo Ibrahim. 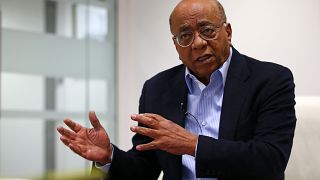 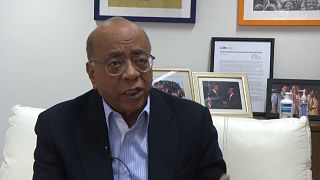