The opposition presidential candidate in Niger, Mahamane Ousmane cast his vote Sunday morning in Birni, a working-class neighborhood in his hometown of Zinder, while Mohamed Bazoum, the anointed successor to Niger's outgoing President Mahamadou Issoufou, cast his at the Niamey City Hall.

The two candidates ex president Mahamane Ousmane and Mohamed Bazoum faceoff in a run-off presidential elections that will be the first democratic transfer of power in Niger since independence from France in 1960.

The west African nation's outgoing President Mahamadou Issoufou hailed the second round of the elections.

"The alternation of power is happening. The peaceful handover that has been lacking in Niger for decades is about to come to fruition. I am proud. I am-- proud to be the first democratically elected president in our history to be able to hand over to another democratically elected president. This is a major event in the political life of our country." Issoufou told the crowd at his poilling center after casting his vote.

Bazoum had won 39.3% of the votes in the first round, Ousmane almost 17% and the first share with a clear advantage.

But if the vote in the capital Niamey is historically acquired to the opposition, the vote in the country's second largest city, Zinder (south-east), is subject to debate: this region, an important electoral basin, is the stronghold of the two candidates who spent the last days of the campaign to try to convince their voters.

A few dozen observers from the Economic Community of West Africa (ECOWAS) were deployed to monitor the elections.

The results are expected in the coming days. 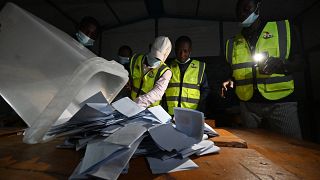