The Coalition of Patriots for Change (CPC), an alliance of six of the most powerful armed groups that have controlled two-thirds of the Central African Republic's eight-year civil war, said in a statement "Contacts and negotiations have taken place with humanitarian providers to exceptionally open a humanitarian corridor for NGOs,"

Since the start of its offensive in mid-December to overthrow the regime of President Faustin Archange Touadéra, the CPC has been seeking to cut National Roads 1 and 3, which are vital roads linking the capital of the landlocked country to neighboring Cameroon.

The  rebels are attempting to "suffocate" Bangui, according to the UN.

Since the end of January, the regular army and its allies, Rwandan soldiers and Russian paramilitaries, have been carrying out a counteroffensive on National Roads 1 and 3, axis to allow the resumption of convoys.

On Monday, a first convoy of humanitarian aid had already arrived in Bangui under the escort of Blue Helmets after 50 days of blockade, according to the United Nations Mission in Central Africa (Minusca).

The CAR which ranks as the second least developed country in the world according to the UN, will be in need of humanitarian assistance and protection.

57% of the population estimated at 4.9 million are at risk according to the United Nations Office for the Coordination of Humanitarian Affairs (OCHA). "Among them, nearly three-quarters have acute needs". 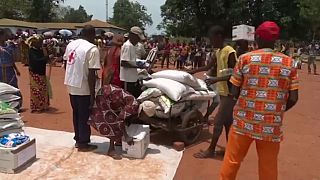