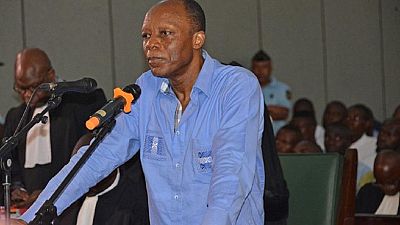 A peaceful march intended to demand the release and medical evacuation of Congolese opposition leader, General Jean-Marie Michel Mokoko has been banned by authorities.

The march, planned by civil society organisations in the Congolese capital Brazzaville on Thursday, was expected to begin from the headquarters of the Congolese Human Rights Observatory (OCDH), at the premises of the Ministry of Justice, near the presidential palace.

“It was a peaceful march in support of a request for medical evacuation of the opponent, General Jean-Marie Michel Mokoko who is very ill in a Brazzaville hospital. From the last news he is very ill. His health situation is deteriorating day by day. We believe that to allow a man to die in these conditions when the authorities can grant his request for evacuation is incomprehensible’‘, Trésor Nzila of the OCHD told journalists at a press conference.

We believe that to allow a man to die in these conditions when the authorities can grant his request for evacuation is incomprehensible.

Charlin Kinouani, a member of the ‘‘Ras-Le-Bol Citizen’‘ Movement questions the motive behind denials for his release.

‘‘We see officials in power being evacuated. We see the clearance notes circulating on social networks. Why can’t another Congolese citizen, a worthy son of this country, who has served the Republic with dignity, be granted permission to leave the country to be treated?”, he queried.

The main crossroads on the route chosen by the NGOs were invaded by police forces in riot police vehicles or on foot.

The Congolese authorities cited the “risks of coronavirus infections” to prohibit the march. General Jean-Marie Michel Mokoko, a candidate for the 2001 presidential elections, who was sentenced to 20 years with forced labour in 2018, has been hospitalized since July 2 at the military hospital in Brazzaville.

His lawyers report of his general fatigue and lack of appetite.