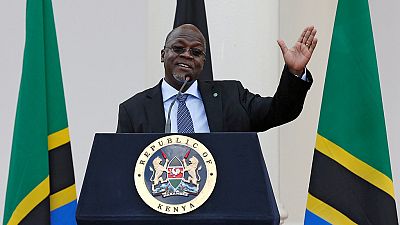 <p>Tanzania’s president John Magufuli on Friday praised an official who sparked outrage and violated the country’s rules by beating more than a dozen students with a stick. The president urged parents and school teachers to do the same to build a disciplined nation.</p> <p>“I congratulated the regional commissioner for caning the students. I told him that he didn’t beat them hard enough,” Magufuli told a public rally in Songwe region, in the southern highlands.</p> <p>Magufuli, nicknamed “Bulldozer” for his focus on discipline, said the students deserved punishment because they were accused of setting fire to dormitories. </p> <p>Critics, including the local government minister, had said the official violated the students’ human rights because they had not been given a fair trial, and only teachers or headmasters are authorized to administer corporal punishment.</p> <a style="font-size:16px; font-color:yellow;" href="https://www.africanews.com/2019/09/18/south-africans-react-to-court-ruling-criminalising-spanking-of-children/"target="_blank"><span class="caps">ALSO</span> <span class="caps">READ</span>: South Africans ridicule court ruling that bans parents from spanking children</a> <p>The East African nation’s leader has courted controversy before. His government refused to share information on Ebola, it’s economic growth figures were disputed and he once told Tanzanian women to “set your ovaries free” and bear more children.</p> <p>Corporal punishment is legal in Tanzanian schools, but only a headmaster or designated teacher can administer it.</p> <h2 style="font-size:16px;">Beating sparks outrage online</h2> <p>Video clips went viral on Thursday showing the commissioner, Albert Chalamila, beating a group of male secondary school students contrary to regulations. Holding a stick in each hand, he is seen beating students one by one as they lay on the ground.</p> <blockquote class="twitter-tweet"><p lang="en" dir="ltr">It’s unfortunate…. 13 Students from Kiwanja Secondary School in Chunya District-Tanzania, are being punished by Mbeya Reginal Commissioner Mr Albert Chalamila; simply, they have been found to have mobile phones in their possessions whilst still at school.<br /> <br /> <span class="caps">THIS</span> IS <span class="caps">UNACCEPTABLE</span> <a href="https://t.co/hOrXSAldvz">pic.twitter.com/hOrXSAldvz</a></p>— Dickson Amos Ng’hily (@NghilyDickson) <a href="https://twitter.com/NghilyDickson/status/1179693300883873793?ref_src=twsrc%5Etfw">October 3, 2019</a></blockquote> <script async src="https://platform.twitter.com/widgets.js" charset="utf-8"></script> <p>The clips sparked public anger among Tanzanians on social media.</p> <p>“I condemn this barbaric act … the regional commissioner abused his powers by punishing the students contrary to procedure,” Anna Henga, executive director of the Legal and Human Rights Centre, said in a statement.</p> <h2 style="font-size:16px;">‘What human rights?’: Magufuli asks</h2> <p>Magufuli said the students, accused of torching dormitories, got what they deserved.</p> <p>“We must use the cane against children at schools and at our homes. We must have a disciplined nation,” he said.</p> <p>Some western diplomats have complained that Tanzania is giving short shrift to due process, human rights and rule of law. The government rejects the criticism.</p> <p>“What human rights are they talking about?” said Magufuli, who ordered all students in A-level classes at the school to be suspended until their parents pay for the damage caused by the alleged arson.</p> <p>Magufuli’s backing of the official appeared to overrule any possible action by Tanzania’s regional administration and local government minister, Suleiman Jafo, who told journalists earlier that he would demand an explanation from the official for whipping the students. </p> <p><strong><em><span class="caps">REUTERS</span></em></strong></p>

We must use the cane against children at schools and at our homes. We must have a disciplined nation.