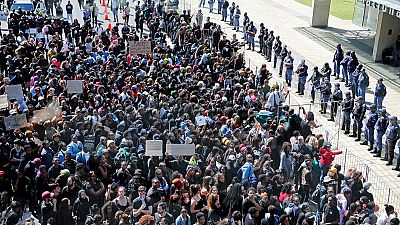 <p>Students, men and women on Wednesday demonstrated against South Africa’s “femicide epidemic” as the World Economic Forum on Africa kicks off in Cape Town, amid growing alarm over gender violence in the country.</p> <p>Some 500 demonstrators, mainly young women, gathered in front of the conference venue, where government and business leaders are gathered for the three day meeting, in an effort to draw attention to recent high-profile rapes and killings.</p> <p>With chants of “we want justice”, protesters carried banners that read “Am I next?”, “Rape is a man’s issue” and “This is a femicide epidemic, but it’s time to fight back”. Some scuffled with police outside the venue.</p> <p>One demonstrator, 19-year-old Amber Wehr, said the protests were “not about attacking men but attacking the system that protects men and that offers them inherent privilege”.</p> <h2 style="font-size:16px;">Latest femicide cases</h2> <p>The rally was prompted by two recent brutal murders that have triggered outcry and much soul-searching in a country that is seen as one of the world’s most dangerous places for women and often appears numb to murder and sexual violence.</p> <p>In one case University of Cape Town student, Uyinene “Nene” Mrwetyana, 19, was raped and bludgeoned to death when she went to a post office on August 24.</p> <p>And on Friday boxing champion Leighandre “Baby Lee” Jegels, 25, was allegedly shot dead by her partner, who was a police officer.</p> <h2 style="font-size:16px;">Protesters demand action now</h2> <p>President Cyril Ramaphosa, while meeting with business leaders on Wednesday, called on men to do better, pledging to enhance the budget for judicial processes.</p> <p>A message from Rampahosa’s special adviser on social policies including gender based violence, was rejected by the protesters who called for the declaration of a state of emergency.</p> <p>‘‘We cannot have a state of emergency…Yes, we agree that it is going to take time but we need to do due diligence,’‘ Dr. Olive Shisana told fuming protesters.</p> <p>Shisana further infuriated the protesters when she admitted that it was likely that more women would be killed during the time it would take to do due diligence.</p> <h2 style="font-size:16px;">‘War’ on women</h2> <p>Last year South Africa recorded a 6.9 percent increase in the numbers of murders countrywide, with an average 57 murders committed each day and at least 137 sexual offences committed per day, according to official figures.</p> <p>Women Minister Maite Nkoana-Mashabane, said more than 30 women were killed by their spouses last month alone.</p> <p>“This is a very dark period for us as a country. The assaults, rapes and murders of South African women are a stain on our national conscience,” President Cyril Ramaphosa said in a statement on Tuesday.</p> <p>National Assembly Speaker Thandi Modise slammed the “senseless killings” of women in the country.</p> <p>“It is clear that a war has been declared against women and girl children… it cannot be business as usual.</p> <p>“Extraordinary interventions are called upon to bring an end to these senseless acts of lawlessness. This is a crisis,” she said.</p> <p>The foundation for the country’s moral compass, retired archibishop Desmond Tutu, said gender and xenophobic violence in South Africa “reflect a national emergency”.</p>

It is clear that a war has been declared against women and girl children.