Ghana running out of sea food due to overfishing 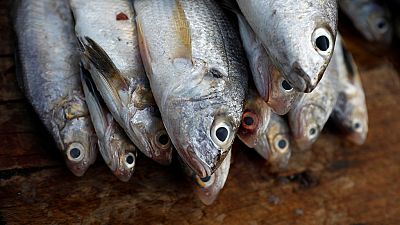 “Very often, when they go to sea, they do not catch anything,” Mercy Allotey, a fish seller,“Our fishing is spoiled.”

Overfishing has devastated the seabed in Ghana’s sea territory. The United Nations estimates that 2 million people, or 10% of the total population of this small country in West Africa, depend on this crucial sector.

Responsibilities are shared between factory boats, often operated by Chinese companies that scour the seabed, and devastating environmental practices of tens of thousands of small-scale fishers trying to offset losses.

In a practice known locally as “ saiko “, which was once a way of recovering “leftovers” from large fishing vessels, trawlers have developed an extremely lucrative trade.

They collect en masse fish usually targeted by local fishermen – including sardines and mackerel – and sell them to communities on the shores via intermediaries.

In a report released in June, the Ghanaian NGO Hen Mpoano and the Environmental Justice Foundation estimate that around 100,000 tons of fish were sold in 2017, significantly reducing employment opportunities for Ghanaians.

This practice would cost the country’s economy about $ 50 million a year.

Ghana is struggling to better monitor the “ saiko” , but also to fight the techniques of local fishermen, such as illuminating the waters during the night to attract fish and poison them with chemicals, or kill them with dynamite.

The government banned artisanal fishing in May and June and will ban trawlers along its coasts in August and September, in order to rebuild the stocks.

“The biggest challenge we have is that everyone, down to the smallest traditional fisherman, understands and applies the laws passed by the executive”, explains Emmanuel Kwafo, head of law enforcement on fishing in the country. the Ghanaian navy.

At the end of July, Kwafo participated in a major maritime conference in Accra, which brought together senior West African naval officials to discuss issues such as illegal fishing.

According to him, we need to change attitudes in West Africa, where illegal fishing is still perceived as the only way to make ends meet.

“While if we act properly and respect the laws, we increase our chances of survival” in the long term, he explained.

Amal-Deen Ali, director of the Accra-based Center for Maritime Law and Safety in Africa, says the fisheries sector is “directly linked to Ghana’s food security, national security and survival as a livelihood. Fish generates about 60% of the protein consumed by Ghanaians.

For him, the priority is to focus on the scourge of saiko but also to enforce the existing laws on overfishing, local politicians tend to turn a blind eye to these practices to satisfy their community.

Nii Quaye is a former fisherman. He is now working as a fish reseach spokesperson for Jamestown District in Accra.

It conducts inspections and checks in particular that the catches were not made with chemicals or dynamite explosion, practices now sanctioned by heavy penalties under a new law that has not yet entered into force.

“If we send five people to jail for three or six months because they used chemicals, the news will spread and I think everything will stop soon,” he said.

“If nothing is done, in a few years, there will be more fish,” he worries. “And everyone in Jamestown will be hungry.”