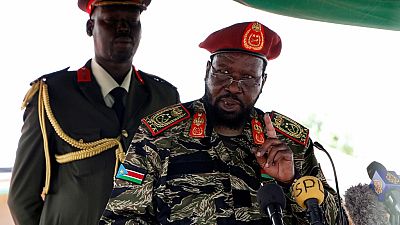 South Sudan’s information minister Michael Makuei said on Monday that the country’s cabinet had banned anyone from singing the national anthem unless the president is present.

Makuei told AFP that different leaders and institutions were playing the anthem at whim, which was an abuse of the national tune, written shortly before independence in 2011.

These are orders and of course when you disobey the orders of the president then you carry your cross.

“We are seeing now even a minister, undersecretary, even governor or state minister, whenever there is a function the national anthem is sung.”

He said president Salva Kiir’s order was passed during a cabinet meeting on Friday.

Makuei said that with the exception of South Sudan’s embassies, which represent the president, and schools where children are taught the anthem, no one was allowed to sing the song in Kiir’s absence.

The minister said that military leaders have also been banned from addressing the public when in uniform.

He did not give details on what the punishment would be if the orders are not followed.

“These are orders and of course when you disobey the orders of the president then you carry your cross,” Makuei said.