Zimbabwean treks to Cairo for AFCON: Gets final treat plus return air ticket 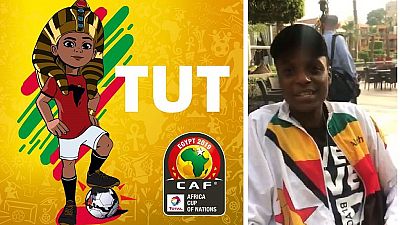 “I’m so excited and I feel honoured at the same time that the CAF president actually recognizes me. A lot of thanks to the big men, Mr. Osasu who worked tirelessly to make this happen.

“For the CAF president to promise me a VVIP treatment on the final match day and also to fly me back to Zimbabwe is something awesome and also incredible, thanks to everyone,” these are the words of Alvin Zhakata, a football fan.

Alvin, a fan of the Zimbabwe national side, the Warriors, embarked on a road trip to watch the team play at the African Cup of Nations, AFCON.

Incidentally he reached Cairo the Zimbabwean team he hoped to watch play live had been eliminated from the competition. They lost two games – the first and third against Egypt and DRC respectively.

The Warriors’ only point at the tournament was in a draw with Uganda but they crashed out at the group stages even as the three other teams progressed to the next round.

His story was widely reported via social media and some conventional outlets, it turned out that it got the attention of a BBC World Football journalist, Nigerian Osasu Obayiuwana, who intervened on his behalf.

Which intervention got the Confederation of African Football, CAF, president to direct that Alvin be given a seat at the July 19 final between Algeria and Senegal in Cairo.

Not just that, his journey back ,to Zimbabwe will be via the aerial route despite coming by road.

The other Cape to Cairo story is of how South African teenagers built a plane with which they flew across the continent to the Egyptian capital. They are scheduled to fly back using a different route.

Some good news for AlvinZhakata: CAF_Online President AHMADCAF2017 has promised me that you’ll have a great experience at the #AFCON2019 #ALGSEN final on Friday. RealMamadouGaye has been delegated by him to sort you out. You are a true fan of African football. Enjoy… pic.twitter.com/fSpqFAXppJ