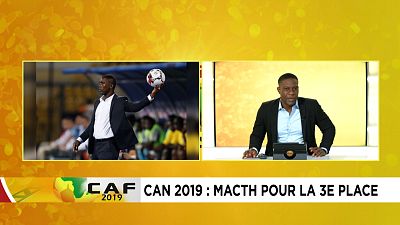 Hello and welcome from around the globe as we bring you the latest from Egypt. Today will be the battle of the Eagles in the Afcon classification match.

After succumbing to defeats to both Algeria and Senegal in the semi-finals of the AFCON, the Super Eagles of Nigeria and the Carthage Eagles of Tunisia will be looking to end their campaign in Egypt on a high note.

The third-place playoff fixture between the two comes off at the Al Salam Stadium in Cairo, 7 pm GMT.

Tunisia and Nigeria have met four times at the Africa Cup of nations with the Super eagles edging it by three wins and one defeat .

Nigeria is the team with the most Afcon third-place playoff games 7. They have won their previous six outings, but Tunisia have won only one of their three third-place games in the continental competition, in 1962 against Uganda.

Super Eagles coach Gernot Rohr on the other hand hopes his side can take the third spot especially after the Nigerian Football authorities confirmed he will be keep his job despite the results of this Afcon.

Grisha became an international referee in 2008 and has featured in every CAF senior competition since 2013 and will be assisted by Egyptian Mahmoud Ahmed Kamal and Issa Yaya from Chad, while Joshua Bondo will act as the fourth official.

Cameroon’s football federation Fecafoot announced on Tuesday that Clarence Seedorf has been sacked as coach after the side failed to defend their Africa Cup of Nations title.

The former Real Madrid player, 43, had been in charge for under a year.

His assistant Patrick Kluivert, his former Netherlands and Ajax team-mate, has also left his role.

Cameroon lost 3-2 to Nigeria in the last 16 in Egypt, leading to the country’s sports minister calling for Seedorf to leave.

Seedorf had said he was happy to continue and felt his squad had shown promising signs.