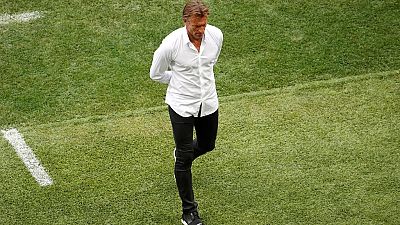 ZIFA said it regretted Sunday’s decision because ‘the nation and team needed his wise counsel’.

‘‘ZIFA is grateful to Mr Chidzambga for diligently availing his services and wish him well in his upcoming endeavours and trust he remains available whenever we seek his wise counsel.’‘

Sunday won 4 regional COSAFA titles with Zimbabwe and took the national team to the African Nations Cup in 2004 and 2019.

In Egypt, Zimbabwe were eliminated at the group stage, having lost against the hosts and Democratic Republic of Congo, only managing a draw against Uganda.

Rahman Gumbo and Lloyd Mtasa were given appointed in interim roles to lead preparations for the upcoming African Nations Championship (CHAN) assignment against Mauritius.

Two-time Africa Cup of Nations winner Herve Renard quit his position as coach of with Morocco, following the country’s shock early exit at the tournament in Egypt.

“It’s time for me to close this long and beautiful chapter of my life, not without some emotion and sadness, but it is an inescapable decision made well before the 2019 Cup of Nations,” the 50-year-old Frenchman wrote on Twitter on Sunday.

Morocco were among the pre-tournament favourites with Renard seeking to claim an unprecedented third Cup of Nations title with three different countries – after successes with Zambia (2012) and Ivory Coast (2015).

But after winning all their group matches without conceding a goal, the Moroccans were bundled out following a penalty-shootout in the last-16 by outsiders Benin.

“I made that decision after having, obviously, considered it carefully. Thanks to the players, to the staff, the fans, the honest journalists and all those who demonstrated their support,” he added.

Renard took Morocco to last year’s World Cup in Russia where despite elimination in the first round, they left a positive impression.

His departure means coaches from seven of the 24 finalists have now left their jobs after the tournament in Egypt, which Algeria won by beating Senegal 1-0 in the final in Cairo on Friday.

Cameroon became the latest country to sack their coaching staff, following dismal results at the Africa Cup of Nations.

Dutch coach Clarence Seedorf and his assistant, former Netherlands striker Patrick Kluivert, were axed after the defending champions were dumped out in the last 16 after losing 3-2 to Nigeria earlier this month.

The Indomitable Lions won just one of their four matches at the tournament in Egypt, which led to calls from the country’s sports minister, Narcisse Mouelle Kombi, for the pair to be released from their contracts.

He got his wish within hours on Tuesday as Cameroon’s football federation announced it had terminated the four-year deal Seedorf had signed in August 2018.

The body said in a statement on that it had brought an end to the respective contracts of Seedorf and Kluivert “following the premature exit of Cameroon’s men’s flagship squad”.

Former AC Milan and Netherlands midfielder Seedorf was in charge for 12 matches, but won only four against Malawi, Comoros Islands, Zambia and Guinea-Bissau.

The job was his first in international football after previous brief spells in charge of AC Milan and Deportivo La Coruna in Spain.

Cameroon will host the next Nations Cup finals in June 2021, but must take part in the 2022 World Cup qualifiers that are likely to start later this year.

Guinea, who reached the last 16 of the Africa Cup of Nations in Egypt on Monday fired their coach Paul Put.

Put traded blames with captain Ibrahima Traore over tactics at the tournament and his dismissal was announced by the Guinea Football Federation who accused him of meddling in financial matters.

The Belgian, who had been in the job for 16 months, rejected the charges.

Namibia’s coach Ricardo Mannetti has not had his contract renewed after the country lost all three group games.

The 44-year-old Mannetti departed after five years in charge of Namibia, an unusually long tenure by African standards, and was on Monday replaced by Bobby Samaria.

Tanzania’s coach Emmanuel Amunike has been sacked by the countyry’s football federation (TFF), following the Taifa Stars’ failure to progress past the group stages at the Africa Cup of Nations.

TFF issued a statement on Monday saying it had parted ways with the ex-Nigerian international and coach.

‘‘The Tanzania Football Association (TFF) and the National Team Coach, Emmanuel Amunike, have reached a joint agreement to terminate the contract between us,’‘ read part of the statement.

Amunike has been coach of Tanzania since 6 August 2018. At AFCON 2019, Tanzania lost all three group matches against Senegal, Kenya and Algeria.

TFF which said the search for a new coach starts immediately, added that an interim boss will be unveiled on July 11.

Egypt’s coach Javier Aguirre became the fist personnel casualty of the ongoing Africa Cup of Nations after he was sacked on Sunday, following the hosts’ elimination from the tournament.

Egypt, who are seven-time record African champions, were eliminated by South Africa in the round of 16, to the disappointment of their proud and passionate fans.

Aguirre came in for criticism for his management of the side during the African Cup of Nations, with Egypt legend Wael Gomaa accusing the Mexican of having “no tactics or strategy”.

“There is no plan, there are no players, no one knows how to defend or attack,” said fan Ahmed Mostafa outside the stadium after the loss.

“This is what the four games we played looked like. None of the players wanted to play, really. There is no spirit, nothing.”

Following Saturday’s defeat, Aguirre said he alone took the blame for the host nation’s disastrous campaign and indicated he would hold talks with the Egyptian football association over his future.

“I think the game was open and there were chances for both teams. The only difference was the goal for South Africa,” Aguirre said after the 0-1 loss to South Africa.

Thembinkosi Lorch scored the only goal of the last-16 match in the 85th minute to give South Africa a stunning victory.

Aguirre was sacked by the country’s Football Association president, Hani Abou Rida who has also since resigned his position and asked members of the dederation’s board to do the same.

The decision had been “a moral obligation” said the Egyptian FA in a statement after “disappointing Egypt’s supporters”.

Rida had led the Egyptian FA since 2016, in a three-year reign marked by controversy, including a 2018 World Cup fiasco that saw the Pharaohs fail to get out of the group stages after losing all of their matches.

The location of the team’s training base in Grozny, the capital of Muslim-majority Chechnya, spurred widespread criticism, especially from human rights groups, over concerns of abuses by Chechen President Ramzan Kadyrov, supported by Russia’s President Vladimir Putin.

The federation has also feuded with Salah, the reigning African Footballer of the Year and won the Champions League last month with his club Liverpool, who has accused the body of misusing his image inside the country.

Recently the reinstatement of a player who had been banned following sexual harassment charges had provoked further widespread criticism of the Egyptian FA on social media.

Meanwhile, Uganda who were eliminated by Senegal in the round of 16 have also parted ways with their coach Sebastien Desabre.

The Ugandan Football Federation (FUFA) said in a statement that it had “mutually agreed” to end the Frenchman’s contract.

“The reasons for termination of the employment contract are for the benefit and growth of both parties,” it said.

Uganda, playing a bold attacking game, beat Democratic Republic of Congo in their opening game, outplayed hosts Egypt despite losing 2-0 and gave Senegal a run for their money in the round of 16 before losing 1-0.

“FUFA recognises the contribution by Mr Desabre for the improvement of the sporting and professional organisation of the Uganda Cranes inclusive of qualification to the AFCON 2019 Finals and also to the Round of 16,” said the statement.

Before being appointed by Uganda in December 2017, he coached clubs in Ivory Coast, Cameroon, Tunisia, United Arab Emirates, Algeria, Morocco and Egypt.

The 42-year-old has since been appointed as head coach for Egyptian club side Pyramids Football Club.